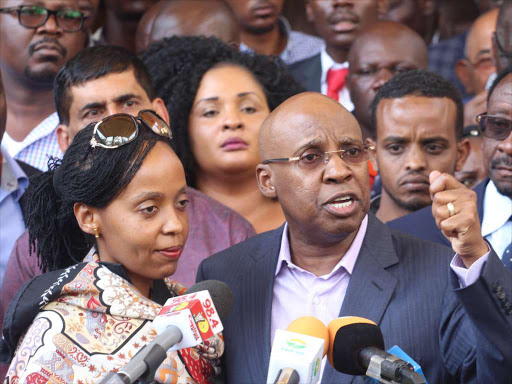 Businessman Jimmy Wanjigi and his wife addressing Journalists at his home after the police left./EZEKIEL AMING'A

Nation Media Group risks parting with Sh100 million as compensation, if businessman Jimi Wanjigi succeeds in convincing the court his rights were violated by a fake obituary the daily carried.

Wanjigi sued the Nation over an obituary they published in February, which claimed he had died. In his suit papers, the businessman said the action led to breach of his right to privacy and caused his loved ones mental anguish.

Through his lawyer Willis Otieno, the businessman, who was believed to be a NASA strategist, said the advert treated him as a dead body.

“The obituary read that the first applicant was supposed to be buried at Langata cemetery. The obituary treated him as an object while still alive and was against his right to dignity,” Otieno told the court.

He said the advert disclosed his family and their whereabouts hence exposing them to danger.

Wanjigi accuses the media house of carelessness, saying that as an old operator, it ought to have verified the information before publishing the traumatising advert.

On its part, the media house denied it breached Wanjigi’s rights in any way simply because the businessman waded into public space and as such, his life became important to public.

It also said that Kenyans knew the location of his house, including its inside out of a police raid by the police.

NMG also says because the advert was paid for by a third party, it is impossible to hold that it should bear responsibility to verify the same, thus the case be dismissed.

The death announcement published on February 7 caused an uproar after it emerged the picture used is that of Jimmy Wanjigi.

“It is with deep sorrow that we announce the death of James Richard Wanjagi...which occurred after a failed armed robbery in Nairobi’s Karen estate,” it read part.

The death announcement was published on page 49 of the Wednesday edition of the Daily Nation newspaper. According to the obituary, Wanjagi was the son of a James Maina and Wambui Magari and a husband of an Irene.

“Nation Media Group does not condone such publication, which clearly goes against our editorial policy. We have taken immediate action against those responsible for the placement of the announcement, including reporting the matter to the police for further investigations,” the response read in part.

The Nation Media Group has released CCTV footage and images of the man who booked the obituary.

Head of Corporate and Regulatory Affairs Clifford Machoka said NMG had taken immediate action against those responsible for the placement of the announcement.