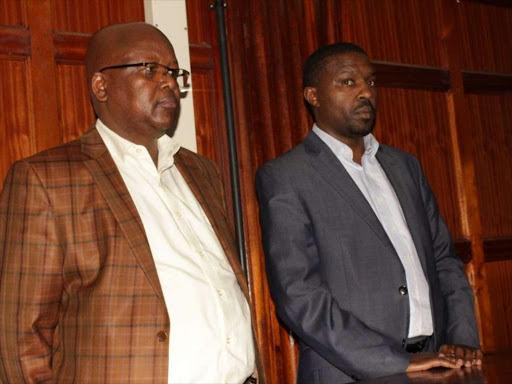 NHIF finance director Wilbert Kurgat and CEO Geoffrey Mwangi. The NHIF board has sent the two on compulsory leave and appointed other officials in the interim. /COLLINS KWEYU

Embattled NHIF chief executive Geoffrey Mwangi and the acting finance director Wilbert Kurgat have been sent on compulsory leave pending the court's decision on their case.

In a statement, NHIF board chairperson Hannah Muriithi said the two have been replaced in the interim by Nicodemus Odongo and Bernard Njenga respectively.

Muriithi said the decision was unanimously arrived at by the NHIF board of management.

"We assure all our stakeholders, our members and partners that NHIF will continue to discharge its mandate and responsibilities without disruption," she said in the statement dated November 27.

Odongo currently holds the director of strategy position, while Njenga is in charge of management accounting.

Mwangi and Kurgat have been charged with conspiracy to defeat justice and disobedience of a lawful order in relation to investigations into the loss of Sh2 billion at NHIF.

The two have denied the charges.

The court on Tuesday rejected their application to block their prosecution over alleged misappropriation of the funds.

Nairobi chief magistrate Francis Andayi was on Wednesday set to deliver his ruling on their bail application.