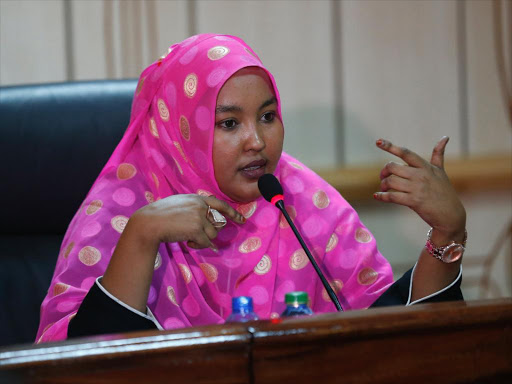 Wajir Woma Rep Fatuma Gedi when she appeared before Powers and Privileges committee to answer to the allegations of her involvement in the sugar report bribery, September 25, 2018. /JACK OWUOR

MPs on Wednesday adopted a report barring investigative agencies from probing members over bribery allegations on the sugar report.

The report by the Powers and Privileges Committee on the inquiry into the alleged bribery was tabled on the floor of the House with amendments on the recommendations on the sugar report.

The amendments were introduced by Endebess MP Robert Pukose and seconded by Majority leader Aden Duale.

MPs on August 9 shot down the sugar report by the joint committee on Trade and Agriculture on grounds that it did not conclusively interrogate critical issues raised.

The team led by Kanini Kega recommended that Treasury CS Henry Rotich and former Agriculture CS Willy Bett be investigated over sugar importation and the awarding of waivers to 14 companies that evaded tax worth Sh10 billion.

A section of MPs later claimed the report was rejected because some MPs were bribed with Sh10,000 in toilets.

Gedi later admitted to lobbying members to defeat the sugar report, but denied claims that she gave out money to her colleagues.

Barasa said Gedi was protecting East African Community CS Adan Mohammed, who was indicted for failure to ensure compliance with standards in the importation of the allegedly contaminated sugar.

Gedi later confronted Barasa in the precincts of Parliament over the issue, causing a scene.

During Wednesday’s debate, Duale said the members who made the allegations are the ones who should be investigated by the EACC and the DCI.

He said it was not fair to subject the whole House to an investigation on the basis of mere allegations.

"All the allegations that had been said were never proved," he said.

"The DCI can start an investigation and in 2022 you might not get clearance. That is why the premise of the Constitution is that Parliament must regulate itself," Duale said.

“This report is a soul-searching report. And please, Members of Parliament in your private meetings let our names not be your denominator. Don’t discuss us,” Duale said.

He said MPs who have issues with operations in the House should make their concerns known before the Parliamentary Accounts Committee.

Minority leader John Mbadi said it was ridiculous for MPs to make such allegations against their colleagues without tabling any evidence.

"When you make allegations that a colleague Member of Parliament has either given a bribe or taken a bribe, you must prove it. You must provide evidence, otherwise we will be chasing rumours and propaganda," Mbadi said.

He said it was disparaging that some MPs went to the media and mentioned their colleagues as having received bribes yet the said colleagues were not in the House on the day of the debate.

"And that is the MP for Suna West (Peter Masara), he was in the village but he was mentioned," Mbadi said.

The Gwasi MP said the Powers and Privileges Committee should consider reprimanding the MPs who mentioned their colleagues without substantiating their claims.

"We have integrity, we have our names. In fact, a politician eats his or her name. They should not play with our names."

"If you have evidence against me, mention it, but if you don’t have and you make wild allegations against Mbadi, you should be reprimanded and bear the consequences," Mbadi said.

He said many MPs have been defamed as a result of them being mentioned as having received bribes.

"Let those who made the allegations go to the DCI and record statements so that they may also be investigated,” she said. “Let them carry their cross,” she said.

Ndhiwa MP Martin Owino also supported the amendments, saying the dignity of the House depends on what the MPs say, how they say it and why they say it.

He echoed Mbadi’s recommendations that members who made the bribery allegations be reprimanded.

"Mr Speaker, it’s as if we are piercing our own feet and crying for help," said Owino in reference to the lack of evidence being adduced before the privileges committee.