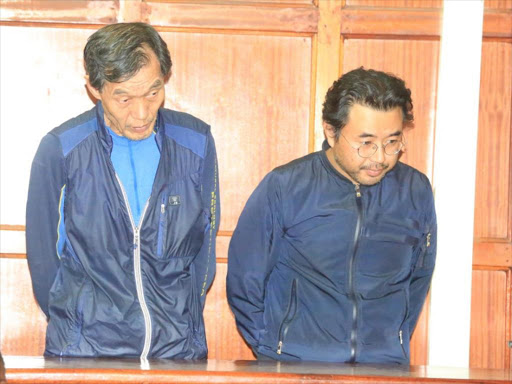 The two South Koreans when they appeared before a Milimani court on November 27 for being in possession of Sh700 million fake currency. /JOSEPH NDUNDA

Two South Koreans have pleaded guilty to charges of being in possession of Sh 700 million fake Pounds and Euros.

Kim Kyurak and Lee Ug were caught with the currency at a rented apartment in Kilimani on November 19.

They were arraigned before Chief Magistrate Francis Andayi.

The charges against them read that they were in possession of papers intended to resemble and pass as currency notes.

The two were also found with 1,200 sterling pounds in denominations of 50 valued at Sh7.8 million.

They have been remanded at the Kilimani police station until tomorrow when they will be sentenced.