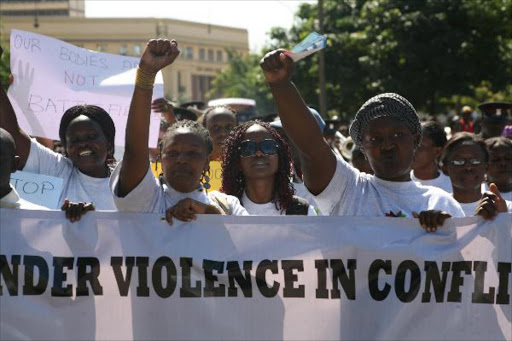 A file photo of women during a procession along Nairobi streets to mark the first global campaign against rape and gender violence. /HEZRON NJOROGE

Women in Africa are at the greatest risk of being killed by their intimate partner or family members, the latest report by United Nations Office on Drugs and Crime says.

The report released on Sunday ranks Kenya among countries with high cases of female homicide cases.

The 'Global Study on Homicide: Gender-related killings of women and girls 2018' shows women are far more likely to die at the hands of someone they know.

Africa and Asia had the largest number of females killed purely by intimate partners in 2107 with 11,000 each.

"More than two-thirds of all women (69 per cent) killed in Africa in 2017 were killed by intimate partners or family members," the report says.

The UNODC notes 87,000 women were intentionally killed in 2017 globally, showing an increase in the number of female deaths related homicide.

Women killed in Africa by intimate partners or family members in 2017 was 19,000.

As with homicide in general, in countries where most women are killed by partners or other family members, most physical and sexual violence against women is perpetrated by partners.

According to the report, although sexual assault by a stranger is widely acknowledged to be a crime, rape in marriage, sexual coercion in schools, sex in return for a job, and forced marriage are still tolerated or socially condoned in many parts of the world.

Even though men are the principal victims of homicide globally, women continue to bear the heaviest burden of lethal victimization as a result of gender stereotypes and inequality, it states.

The report has attributed the high numbers to jealousy and fear of abandonment to be among the motives.

"In order to prevent and tackle gender-related killing of women and girls, men need to be involved in efforts to combat intimate partner violence and family-related homicide and in changing cultural norms that move away from violent masculinity and gender stereotypes," it says.