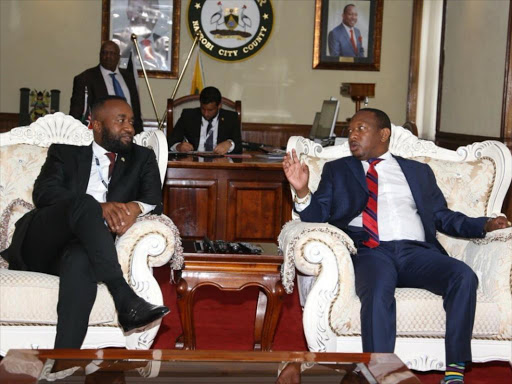 “We can work and make our two cities great. I’m impressed with the ongoing beautification in your city,” Joho told Sonko

when he paid him a courtesy call at City Hall on Monday.

Joho promised to initiate the same exercise in his county.

He said he will establish inter-county relations between Mombasa and Nairobi for the benefit of residents of the two cities.

On his part. Sonko pledged to work closely with Joho to ensure the two cities become the best to invest, live and work in.

“My administration is ready to work closely with your county government on matters relating to the environment and the blue economy,” said Sonko.

He met with Danny Faure of Seychelles, Ali Mohamed Shein of Zanzibar and African Union Commission Chairperson Moussa Faki Mahamat, whereby they talked much about inter-city relations on matters of environment, transport and trade.

On Sunday night, Governor Sonko hosted a dinner for the delegates attending the conference at KICC.

Sonko said Nairobi is a modern City that boasts one of the best-developed infrastructure in the East and Central African region.

“Nairobi serves as an economic and commercial hub, and a gateway to and from many parts of the world,” Sonko told delegates during the Sustainable Blue Economy Conference dinner at Kenyatta International Convention Centre on Sunday night.

Over 17,000 international delegates are attending the conference, which officially kicked off on Monday at KICC Nairobi.