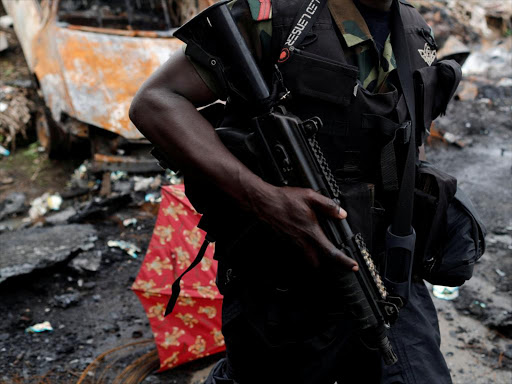 A Cameroonian soldier walks past a burnt car while patroling in the city of Buea in the anglophone southwest region, Cameroon October 4, 2018. /REUTERS

Kenyan priest based in Cameroon.

shot dead by Cameroonian soldiers outside his church in Mfame.

The defence forces have denied responsibility in the shooting saying the clergyman was gunned down by assailants.

Ondari's family said he was holding an evening mass when a soldier firing at random hit him on the head killing him instantly.

His father says the son was on a missionary activity when he was shot by the soldiers who were patrolling the troubled areas.

Foreign Affairs PS Amb Macharia Kamau said the ministry would continue pursuing the answers on circumstances that led to the priest's death.

"The government of Kenya, through it's High Commission in Abuja, Nigeria has urgently and formally inquired from the government of the Republic of Cameroon about the circumstances leading to Father Ondari's death," Macharia said in a statement on Sunday.

"We shall not abandon our commitment to the well-being of all Kenyans everywhere. We encourage our nationals to remain eternally vigilant, especially in areas where security cannot be completely guaranteed," he added.

Cameroon has been experiencing conflicts in volatile English-speaking Southwest region.

The chaos started as a strike by lawyers and teachers in 2016 but later on escalated last year upon declaration of the independence of the Federal Republic of Ambazonia by separatists.