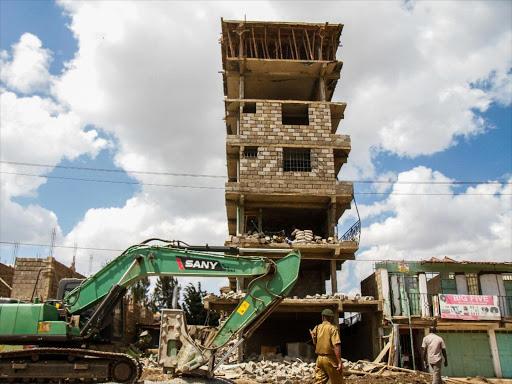 City Hall on Friday demolished a six-storey building in Kayole after it was declared unsafe.

The demolition came just a day after Kenyans caused an uproar on social media over the safety of the structure.

Building owner Caroline Wanjiru was arrested for constructing the house without approval. City Hall said the building was at risk of collapsing.

A National Youth Service bulldozer descended on the building located along Spine Road, minutes after noon. It was brought down under tight security as curious onlookers gathered.

Lands and Housing executive Charles Kerich said the county had approved the construction of only four floors. “We had to mobilise the machinery very fast because of the risky nature of the building,” Kerich said.

On November 9, City Hall issued a notice to Wanjiku to demolish the building . She was also ordered to submit the building’s structural integrity report within seven days. That deadline elapsed on November 16.

Speaking to reporters moments before she was arrested and bundled into a county van, Wanjiku said she had approval documents.She accused the county officials of a witch-hunt. Wanjiku said she had spent more than Sh220 million on the building whose construction started in April.

“You cannot demolish a building because of social media. That is being unfair to me because I have pumped a lot of money into the project,” Wanjiku said.

Governor Mike Sonko warned unscrupulous developers, saying all structures put up without approval will be demolished.

“We will not allow impunity to thrive. Let this be a warning to those who think they can construct buildings without approval that they will face the full force of the law,” Sonko said in a statement.

The governor said they will investigate Wanjiku’s claims that she had approval documents. He said county officers found culpable will be punished.

Several residential buildings have collapsed with dozens over the last three years. In June, a three-storey building collapsed and killed three people in Huruma.

More than 15 people were killed in the same area in 2015 when a residential building collapsed. In December, City Hall’s building inspectorate department said more than 600 houses in Nairobi were unsafe. Most of the structures are in Huruma and other slums in the Eastlands area.