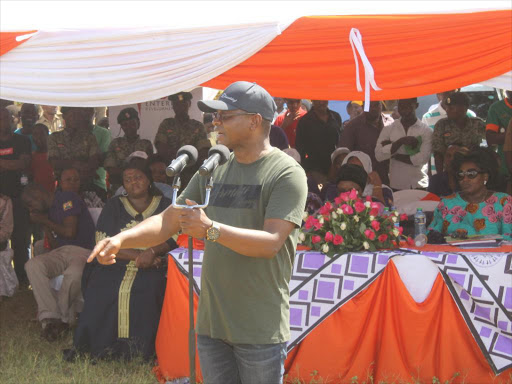 Kilifi Govenor Amason Kingi addressing residents during the launch of 16 days of activism against Gender Based Violence at Matsangoni Primary School in Kilifi county. /ALPHONCE GARI

He said the move will go a long way to reducing the rampant cases of teenage pregnancies in the county.

"Let those involved be subject to such hefty punishments as a lesson to others intending to commit such crimes," he said.

The governor spoke during the official launch of 16 days of Activism against Gender-Based Violence (GBV) at Matsangoni primary school.

Hundreds attended the meeting which saw the county unveil a toll number 1195 for residents to report GBV cases.

"The county assembly shall come up with a law allowing the castration in public for men found guilty of defilement," he said.

Kingi said the 13,000 cases of teenage pregnancies in the county was shocking adding that the number could be higher.

"We are planning a meeting with the county commissioner next week and all stakeholders to strategise on how to end the menace."

He warned chiefs and their assistants against handling cases of teenage pregnancies locally. "Those who do so will face the full force of the law."

The governor attributed the increased cases of teenage pregnancies to poor parenting.

"Poverty is not to blame. There are other areas with high poverty levels than Kilifi yet the cases are not as high as ours," he said.

Gender CAS Racheal Shebesh asked the county to arrest those who impregnate as well as those who marry underage girls.

"Why are women not taking young boys as husbands? Men must stop such acts."