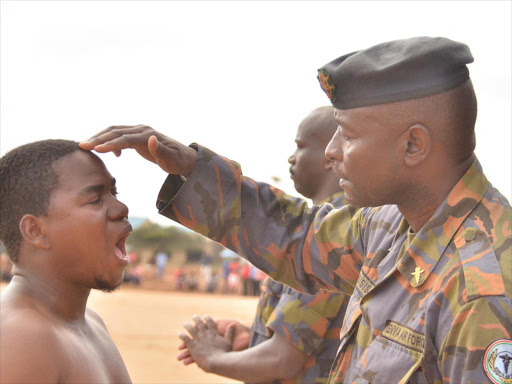 A KDF soldier examines a prospective recruit during the recruitment drive at the Hola Stadium, November 23, 2018. /ALPHONCE GARI

A number of youths were locked out of KDF recruitment in Tana River after testing positive for sexually transmitted infections.

Majority of 50 potential recruits in Galole sub-county were turned away after failing the mandatory medical tests.

Apart from STIs, medical tests also found many with varicose veins on their legs and arms.

Lt Col Paul Aruasa said they don't list people with varicose veins since they are signs of high blood pressure.

"Those who qualified to the medical extermination stage were suffering from the two conditions," he said.

Aruasa said harsh climatic conditions in Tana River county could be the reason for the high population of people with varicose veins.

He said the high prevalence rates of STIs could be as a result of a culture that allows youths to engage in unprotected sex.

Despite the challenges, the KDF officer said they managed to get the number of candidates they wanted.

Four people, among them an ex-NYS officer, were recruited ahead of the January 2019 training.