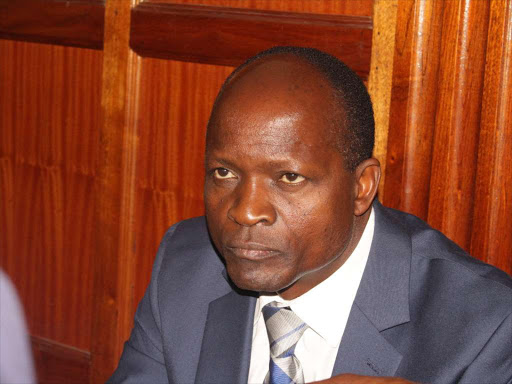 Migori Governor Okoth Obado at a Milimani court on Monday,September 24 where he was charged with the murder of 26 years old Rongo University student Sharon OtienoPHOTO/COLLINS KWEYU

The DPP wants the Anti-Corruption and Economic Crimes Act amended so corruption and murder suspects are forced to step aside once they are charged.

Director of Public Prosecutions Noordin Haji on Tuesday said he will petition Parliament to amend the law because suspects use their offices to subvert the course of justice.

“I will go to Parliament and ask that Section 62 of the Anti-Corruption Act be reviewed and have subsection 6 expunged,” Haji said during an interview on Citizen TV.

Section 62 ( 1 ) of the Act states that a public officer who is charged with corruption or an economic crime shall be suspended at half pay.

However, subsection 6 protects constitutional office holders from removal. The provision was recently used to reinstate National Land Commission chairman Muhammad Swazuri, who has been charged with corruption and abuse of office.

Mwilu was charged with abuse of office, tax evasion and forgery involving millions of shillings. Obado was charged with the murders of his mistress Sharon Otieno and her unborn baby. The governor has also been charged with being in illegal possession of firearms.

“You have people going back to office and using their offices to subvert investigation and the legal provisions that allowed us to charge him. Its unacceptable,” Haji said.

The courts stopped Mwilu from taking plea until a constitutional reference she has filed is determined.

“We must have a standard and those standards must be applied across the board. The courts need to help us.”

The DPP said there are corrupt elements in the Judiciary. He said claims that anti-graft crackdown in the judicial system is often politicised is misplaced.

He said his assertions will become clear when drug barons being investigated by the US Department of Justice are unveiled.

“You only have to look at the Akasha case in New York. There are judicial officers who were compromised,” Haji said.

“I don’t think anybody will stand and say, this is revisiting. The Americans have the evidence. So when I say there could be corrupt judicial officers, we are not just talking.”