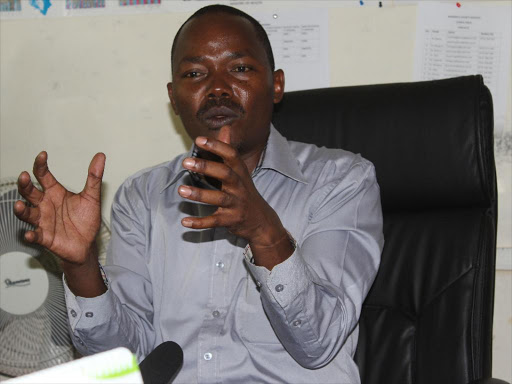 Murang'a County Health CEC Joseph Mbai in his office. A three-year-old boy has died from rabies in Murang's. /ALICE WAITHERA.

A three-year-old boy has succumbed to rabies in Muruka village, Kandara subcounty.

His parents did not know the boy had been bitten by a dog and it was ony discovered at the health centre.

"The child may even have played with a cat that had been bitten by an infected dog," Mbai said.

The disease is highly infectious. “The closer the bite is to the brain, the faster it kills. Its incubation period can range from 72 hours to over one year,” he said.

The boy is the second person to die from rabies in a month after a KCPE candidate died during her first day of the national examination.

Lucy Wambui, who was a pupil at Mwiting’iri Primary School, fell ill during the day and was rushed to Thika Level 5 Hospital, but died soon after she was discharged.

Wambui’s elder sibling was also bitten, but was able to get treatment in time.

Fifteen people have been immunised so far.

Mbai said stray dogs started biting people two months ago, but victims did not take it seriously until the KCPE candidate died.

"When they eventually reported to us that dogs were biting them, we took the matter seriously and deployed a team of health officials to the area," he said.

Meetings are being conducted to sensitise people on the disease and how to handle infected dogs.

Mbai advised residents bitten by dogs to rush to the nearest health centre for immunisation.

"A victim can get immunised before the infection gets to the brain, but once it does, nothing can be done," he said.

Residents have been advised to quarantine infected dogs.