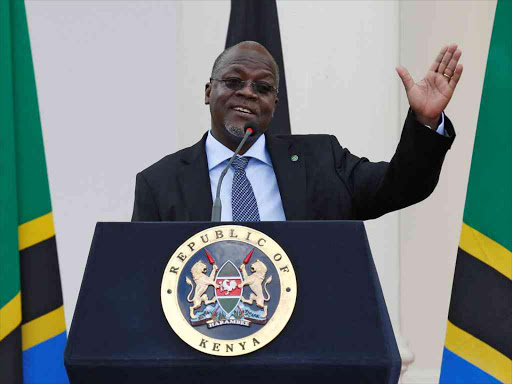 Tanzania's President John Magufuli warned in January that the days of newspapers his government viewed as unethical "were numbered". /FILE

The soldiers started fanning out in the cashew nut growing regions of southern Tanzania - a jolting sight for traders and, campaigners say, a watershed moment for a country once held up as a darling of development groups.

The government said the troops were there last week to make sure growers and markets were obeying new orders by President JohnMagufuli, known to his supporters as "the bulldozer".

His forceful interventions on everything from commerce to sexual morality have placed him on a collision course with donors.

On Monday, soldiers were out again further north in the tourist hub of Arusha, this time to crack down on street black market currency dealers.

"We as Tanzanians are not accustomed to this ... Since independence, we have not seen the army on the streets like this," said lawyer Fatma Karume who has represented opposition lawmakers in a series of lawsuits.

"There's a climate of fear. To suggest that

Magufuli's policies are populist or popular is not understanding the mood among the average person. These policies are not popular, they're authoritarian."

Magufuli, 59, has said his interventions protect the economy. He appeals to nationalism - railing against foreign interference and telling women not to use birth control because Tanzania needs more people.

"Some countries are now facing declining population growth. They are short on manpower ... I see no reason to control births in Tanzania," the president said in a speech in September.

But donors and investors have looked on with increasing alarm, wondering at the speed of the decline of Tanzania's international standing. They say the economic and social interventions have been accompanied by increasing restrictions on the opposition, the press, even bloggers.

"Respect for human rights and the rule of law has been repeatedly undermined," the EU mission in the country announced last week after saying government pressure had led to the "forced departure" of its ambassador.

Foreign Affairs Minister Augustine Mahiga told Reuters that the government had had a number of unspecified issues with the ambassador, without elaborating.

The foreign ministry later said his statement did not reflect official policy.

"What we are now seeing is a tipping point where (the government) has gone after so many different groups that international donors are saying 'Enough is enough'," said Nic Cheeseman, Professor of Democracy at Britain's Birmingham University.

"The question is whether donors are going to continue to pull out," he said. "Tanzania is not a country that can survive without this support, even though it has significant natural resources."

The government has for years received more than a billion dollars annually in foreign grants, putting it among the five biggest aid recipients in Africa, according to the World Bank.

Such grants are expected to account for more than 8 percent of spending, according to this year's budget.

The government response to criticism has ranged from a defiant defence of its record to quieter retreats on individual disputes.

Mahiga, the minister, dismissed pressure from aid groups as "intimidation".

"They are using the words 'You will suffer the consequences'", the minister told Reuters, declining to name the government he had been speaking to.

"If these are the consequences we are ready to suffer," he said. "We cannot kneel down and be blackmailed, because they have money and we are poor. I think this is not how international behaviour should be between neighbours."

Other responses have been less confrontational.

The World Bank this month put a planned $300 million loan for an education project on hold, partly in response to a law preventing pregnant girls from returning to school.

World Bank Vice President Hafez Ghanem flew into the country to discuss the issue, then said a cautious agreement had been reached to get the loan process back on track after Tanzania agreed to reconsider the legislation.

It is a world away from

early days, when he came to power in 2015, and won international praise for his promises to crack down on corruption.

He courted popularity with surprise visits at government departments, at one point walking into the country's main public hospital and sacking senior managers, saying they were not delivering.

But for Murithi Mutiga of the International Crisis Group, the populist alarm bells were already there.

weighed in on social wedge issues that typically attract media coverage, " he said.

"But the direction of travel in which he was taking Tanzania was clear from the start."