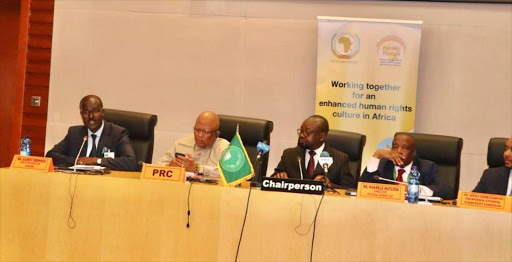 The Second Policy Forum on the state of NHRIs in Africa-NHRI role in prevention and fighting corruption in Addis Ababa on Friday, November 23, 2018. /COURTESY

More than 40 lobby groups under the National Human Rights Institutions have resolved to support investigative agencies in the war on graft in African nations.

Network of African National Human Right Institutions' Gilbert Sebihogo said in a press statement on Friday that they will give evidence on corruption to prosecutors and take up cases of public interest.

“If money meant for hospitals has been swindled, the NHRIs have a

responsibility of filing a case since access to healthcare is at risk,” he said.

They lobby groups will also help in monitoring and investigating graft cases.

The NHRIs made the resolution during a two-day Second Policy Forum on their role in preventing and combating corruption in Addis Ababa, Ethiopia.

war on corruption is key to achieving the African Union’s Agenda 2063 and the Sustainable Development Goals’ Agenda 2030 blueprints,” Sebihogo

More than 100 delegates are attending the forum organised by the lobby groups and the African Union Advisory Board on Corruption.

The meeting was held in line with the African Union's declaration of 2018 as the year of preventing and combating corruption that costs the continent more than USD148 billion (Sh14.8 trillion) annually.

“The war on corruption is complex and dangerous, given the large sums of money involved,” Sebihogo said.

Creation of awareness, Sebihogo said, will

help the public understand the importance of evidence in economic crimes if anti-graft agencies are to make significant convictions.

“NHRIs have witness protection mechanisms which should be extended to suspects who surrender proceeds of corruption,” Sebihogo said.

He raised concern over countries' inability to conduct lifestyle audits on public servants, which has made it difficult to fight graft.

An estimated USD50 billion (Sh5 trillion) is believed to be lost in Africa every year through money laundering, resulting in budget shortfalls and poor services.

Post a comment
WATCH: The latest videos from the Star
by By SAMUEL KISIKA @KisikaSam
News
23 November 2018 - 18:00
Read The E-Paper