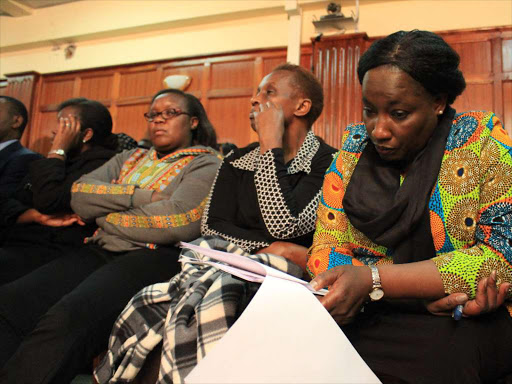 Former Youth and Gender PS Lilian Omollo (R) with a other suspects in the NYS scandal at the Milimani law court, June 20. /COLLINS KWEYU

The NYS case where former PS Lilian Omollo has been charged alongside 36 others with conspiring to loot over Sh226 Million from NYS has been adjourned yet again.

This is after the defense informed the court that there were several documents including a letter that they had not been supplied with by the prosecution even after the court directed them to do so last week.

This is after the court allowed the DPP to bring in new evidence to help in convicting the accused persons.

However, yesterday Lawyer Stephen Ligunya told the court that their inventory was different from that of the prosecution which meant that they were not supplied with some of the documents in the inventory.

Lawyer Migos Ogamba on his part claimed that there was a letter written by the first witness to the DPP that they did not have.

Ogamba said they wanted to use the letter to cross-examine the first witness Sebastian Mokua who has already begun giving his testimony.

State Counsel Jalson Makori said they were not aware of the alleged letter being referred to by the defense and neither the DPP nor the DCI had seen the said letter in question.

Makori said that some of the documents that the defense are asking for cannot be relied upon by the prosecution.

They argued that they cannot supply what they don’t have insisting that they are ready to supply all the other statements and documents in their possession.

In his ruling, Ogoti directed the prosecution and defense to meet and exchange all the documents in the two inventories by close of business yesterday.

He further ordered the Investigating officer to oversee and supervise the whole exercise in court.

Ogoti also directed him to swear an affidavit confirming that they don’t have the alleged letter and documents that the defense was asking for.