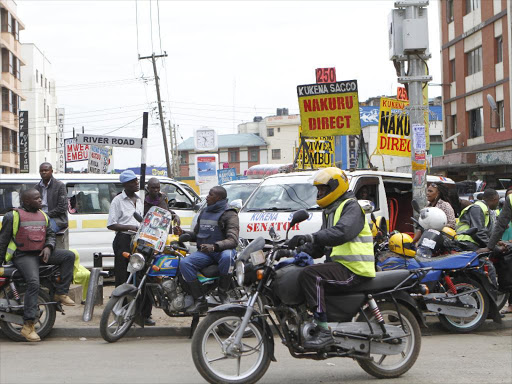 The government has appointed a task force to enforce laws in the public service motorcycle transport sector.

The Task Force on Policy, Legal and Administrative Reforms will be chaired by Julius Mathenge. It will remain in force for 60 days.

The team will oversee the governance of the public service motorcycle sector, and legislative and administrative systems.

It will also examine the existing policy, compile comprehensive data regarding the safety, reliability, cost and other matters of interest to public service motorbike users.

The task force is expected to consult with various government services, public service motorcycle operators and other stakeholders.

Its recommendations will include an implementation strategy for immediate, medium, and long-term reforms in the boda boda sector.

Interior CS Fred Matiang’i on Wednesday said all boda boda operators have to acquire training, get certification, wear helmets among other safety measures before they start operating.

"There will be no two ways about it. They too, have to follow the law," Matiang'i said.

He swore that the government will not relent in the enforcement of 'Michuki Rules'. "We want zero deaths starting this festival season."

At the forum, the transport industry players complained of

The government said it had launched an anonymous reporting system to curb cases of bribery involving traffic police officers.

Interior PS Karanja Kibicho any unlawful behavior committed by the police can be reported to the Internal Affairs Unit in Upper Hill through a toll-free number.