Babu, Njagua to apologise over fistfight in Parliament precincts 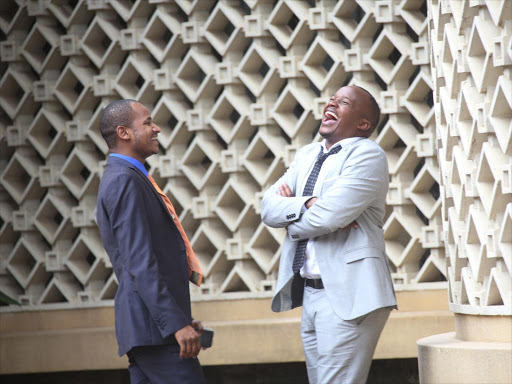 In its report, after independent investigations, the committee chaired by National Assembly Speaker Justin Muturi concluded the two were culpable for disorderly conduct after a vicious spat that degenerated into a physical fight.

The two youthful MPs went for each other’s neck on October 10 after exchanging bitter words in an incident that was roundly condemned by the House as dishonourable.

“Pursuant to section 17 ( 3 )(b) of the Parliamentary Powers and Privileges Act, 2017, the committee reprimands Hon Paul Ongili and Hon Charles Njagua for conducting themselves in a manner that reflected adversely on the dignity and integrity of the National Assembly and its members,” part of the Committee recommendations reads.

Ongili is a former University of Nairobi students leader and is popularly known as Babu Owino.

The committee launched investigations into the duo’s conduct following a formal petition by the Ethics and Anti-Corruption Commission in a letter dated October 12, 2017.

The ethics and anti-graft agency asked Parliament to also take necessary disciplinary action for the unethical conduct and breach of privileges.But in the report tabled on Tuesday, the panel did not, however, propose any disciplinary action against the city MPs, raising fears that such incidents may not be inevitable in Parliament.

The committee held five sittings and reviewed video clips submitted to it as well as oral submissions from witnesses.

Njagua and Babu fought at Parliament’s media centre when the later was due to address a press conference.

It took the intervention of the security officers, who were on duty at the main Parliament building, to restrain the MPs, who then filed a report with the Clerk of the National Assembly.

Appearing before the committee, Babu pleaded for leniency, blaming the then delicate political environment after the controversial August 8 presidential polls.