Atwoli reiterates call for Uhuru to stay on after 2022 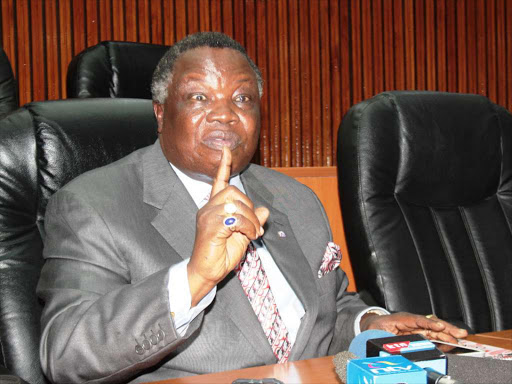 Francis Atwoli, Secretary General of the Central Organization of Trade Unions, speaks to press at his office in Gikomba, Nairobi, January 31, 2018. /JOSEPH NDUNDA

Cotu secretary general Francis Atwoli has reiterated his call for President Uhuru Kenyatta to stay on after his term lapses in 2022.

The unionist, who argues that the same will be possible if the Constitution is amended to expand the Executive, said he will not relent in the push.

Atwoli told the Building Bridges team during a public hearing that the amendment to the Constitution will help end perennial post-election rows.

"People said I was not a normal person when I asked the President not to resign after 2022 as he is young. And if the people of Central want him, he can be a government which can accommodate him."

He said the 2013 post-election row could have been avoided if the Constitution did not allow for a 'winner takes it all' situation.

Atwoli, holding that he came up with the push for a referendum "before it was hijacked by politicians", proposes the creation of six Executive positions "so that everyone will be happy".

He told the Bridges team that the slots will include big communities who feel left out in government.

"Let’s not have the system of a winner takes it all. Let people know how to share," Atwoli said.

On the 2007-08 post-violence, he said Cotu had appealed to the government for national unity.

He said egoism between top leaders hindered the efforts which forced international intervention.

"How do you compromise with a person who steals your cow and enjoys the milk while you are watching, the former prime minister Raila Odinga advisor asked us," Atwoli said.

On last year's election which led to the Handshake, Atwoli said that they met the IEBC team led by Wafula Chebukati on May 15, 2017.

He said that despite giving them the history of the elections and how to mitigate against another dispute, they ignored them.

"Any election in this country will never succeed unless we look at the documents that govern elections," Atwoli said.

"Let's make the document complement our culture, tradition and behaviour in order to have the election succeed."

On leadership integrity, he said Chapter 6 of the Constitution has been watered down.

"In our Luhya culture, if someone raped or even alleged, even if it’s a suggestion that you are involved, one was tied on the neck and frogmarched away from the society," he said.