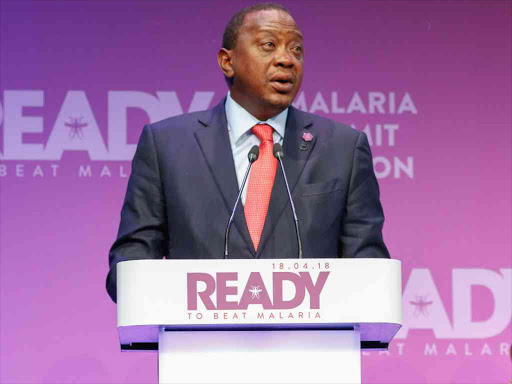 President Uhuru Kenyatta addressing delegates of the Malaria Summit in London the sidelines of the Commonwealth Heads of Government Meeting.Photo PSCU

Kenya reduced its funding for malaria control by 20 per cent in the last three years on account of declining infections.

The World Health Organization in a new report says between 2014 and 2017 Kenya’s funding for malaria went down by 20 per cent. Kenya’s malaria prevalence has dropped from 12 per cent in 2012 to the current five per cent.

The report released on Monday also identifies Kenya to be among countries with low malaria reporting rates. The report however calls for increased investment in malaria control across the world.

Malaria incidence rate in the WHO African region remained at 219 cases per 1,000 population at risk for the second year in a row. “Stepping up investments in malaria research and development is key to achieving the Global Technical Strategy targets. In 2016, $588 million was spent in this area, representing 85 per cent of the estimated annual need for research and development,” the report shows.

The Global Technical Strategy for Malaria 2016–2030 sets the target of reducing global malaria incidence and mortality rates by at least 90 per cent by 2030.

Most of these increases in the period 2016 – 2017 were reported in Burundi, Ethiopia, Ghana, Kenya, Mozambique, Uganda, the United Republic of Tanzania and Zambia.

The report also identifies Plasmodium falciparum as the most prevalent malaria parasite in the WHO African Region, accounting for 99.7 per cent of estimated malaria cases in 2017.

According to the report, 15 countries in sub-Saharan Africa and India carried almost 80 per cent of the global malaria burden. Five countries accounted for nearly half of all malaria cases worldwide. Nigeria had the highest with 25 per cent followed by Democratic Republic of the Congo with 11 per cent. Uganda was the fifth with four per cent.

The report says even though malaria burden has continued to rise in countries with the highest burden of the disease, there is inadequate international and domestic investment in malaria control.

At the same time, the continued emergence of parasite resistance to antimalarial medicines and mosquito resistance to insecticides pose threats to progress.