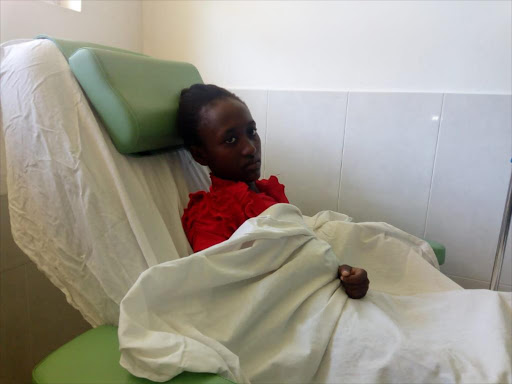 Covered in a white sheet on her hospital bed at Coast General Hospital yesterday, it was apparent Mary Mutua, 14, had mixed feelings.

Her eyes showed a mixture of joy, trepidation and a determination rarely seen in 14-year-olds.

She had just received her 2018 KCPE results on Monday after Education CS Amina Mohamed released them.

She scored a sterling 415 marks out of a possible 500, making her the top student at her Amani Primary School.

“It was by sheer hard work and determination,” she said.

Mary was diagnosed with bone marrow cancer about three weeks before the start of the KCPE.

The diagnosis, however, did little to shake her determination to succeed.

Her father, Josephat Mutua, said he is experiencing mixed feelings.

“I am happy because she did well. But I am sad she has to undergo such pain,” he said, sitting beside her daughter in a reassuring posture.

Eric Kyalo, her uncle, said doctors informed them she could lose her leg if she does not get treatment soon.

“She started feeling pain in her left leg about a month before the exams. At first we thought it was normal pains,” Kyalo said.

It was not until she was taken to a specialist at the Aga Khan Plaza when it was discovered she had cancer. Mary sat her exams through the pain. Doctors have advised the family to seek further treatment in India, which will cost them approximately Sh3 million.

The family has already raised about Sh700,000, as they look up to friends and well-wishers to help save Mary’s leg and life.

The family has been advised to take Mary to India within three weeks.

The family has come up with a Paybill number 127506, where well-wishers can contribute under the account name Mary.

She said she had a hard time moving around because she could only walk for about 50 metres before the pain overwhelmed her.

Josephat, her father, had to carry her to school every morning and back home every evening.

“She had to do the exam on pain killers,” Josephat said.

“When the results were announced, it was a temporary joy. We received the news while walking out of the immigration offices where we had gone to apply for passports for the family,” said Kyalo.

Mary said: “It is hard at first. But then my family convinced me this disease is treatable and that I will be okay. That is when I regained my confidence and composure.”

She said she expected to get more than the 415 she got.

Her dream to be a lawyer and looks up to Paul Musyoki, a top lawyer in Mombasa.

“I spent a lot of time in hospital while preparing for the exam. That contributed to this performance. I believe I would have gotten more mark,” said the determined girl.

She appealed to well-wishers to help her achieve her dream of becoming a lawyer.

National Examination Council shows that the number of candidates who scored above 400 marks increased by 2,427 compared to last year.