DCI and tax agency barred from arresting or questioning Ojienda 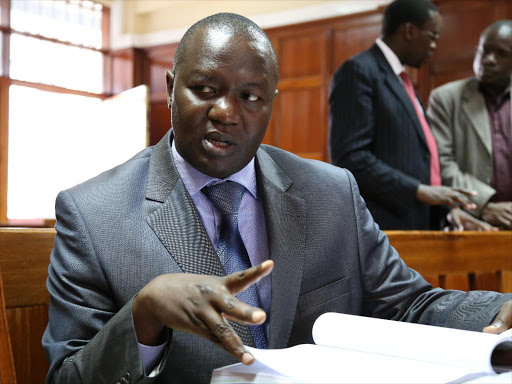 The Directorate of Criminal Investigations and the Kenya Revenue Authority have been prohibited from arresting or questioning lawyer Tom Ojienda over alleged unpaid taxes for 2009-16.
High Court judge Chacha Mwita also prohibited the two agencies from commencing any civil or criminal proceedings or harassing Ojienda in respect to the tax issue.
Ojienda filed the case two weeks ago, seeking to stop his arrest over alleged unpaid taxes. He says KRA is being used to fight political battles, especially now that the JSC-LSK representative elections are approaching.
“It is apparent the respondents are out on a malicious excursion to ‘get me’ and to ensure that I’m subjected to a flawed criminal process smeared with illegalities, bad faith and witch-hunt with the sole intention of irredeemably tainting my reputation in the eyes of the public and lawyers,” he says.
According to court documents, Ojienda says on September 2016, KRA served him with a notice requiring the payment of Sh378 million, which was arrived at after “illegal amendments to his tax register and the insertion of fictitious figures” derived from clients’ deposits and personal emoluments.

“The KRA cannot purport to conduct an assessment after the expiry of five years. KRA is purporting to implement a process after the lapse of five years without any justifiable cause,” he says.
He wants the court to prohibit the KRA, the DCI and the AG from commencing any civil or criminal processes, arresting, summoning, questioning or in any way harassing him with respect to any tax questions for 2009-16 that was subject of a civil case or any other tax questions for that period of 2009-16 pending determination of the case.
Also sought is an order declaring the payment of advocates fees is subject to advocates remuneration order and inbuilt dispute resolution mechanism under the Advocates Act.