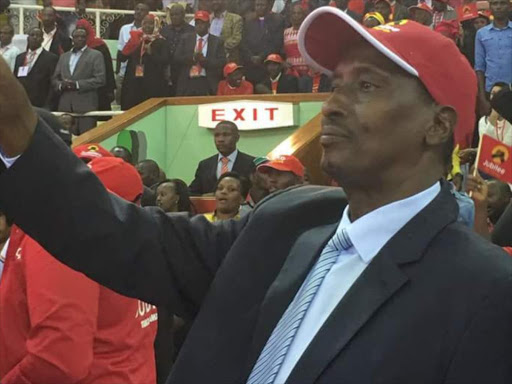 Wajir Governor Abdi Mohamud. The Supreme Court has expunged from its records affidavits showing he studied at Kampala University /FILE

The Supreme Court has expunged from its records two affidavits sworn by officials of Kampala University showing that Wajir Governor Abdi Mohamud was a student.

On October 14, Mohamud tabled new evidence before the Supreme Court in his bid to affirm that he studied and graduated at Kampala University.

The affidavits were sworn by the founding vice chancellor Badru Katerega and academic Registrar Hamza Ssegawa. The two had said the govenor was a student between 2009 and 2012.

Chief Justice David Maraga and Supreme Court judges Mohamed Ibrahim, Jackton Ojwang’, Smokin Wanjala, Njoki Ndung’u and Isaac Lenaola had allowed Abdi to table his academic certificates, stating that he was not given a fair hearing before the High Court and Court of Appeal.

However, today the court noted that the two affidavits in question were filed out of time.

In his sworn affidavit, Abdi had adduced an admission letter from Kampala University dated July 29, 2009.

He produced sworn affidavits by his former fellow students from the institution – Ahmed Mohamed Isaack and Yussuf Shueb Abdullahi.

Further, the embattled county chief produced a sworn affidavit by Ssegawa, confirming that he studied and graduated there.

Another sworn affidavit by Evans Somoni, an academic registrar from the facility from 2005 to 2011, avers that the county boss was admitted as student of the university.

The governor also attached sworn affidavits of lecturer James Nyakweba and former lecturer Wairimu Kiragu to confirm that he attended their classes.