At least 37 Shabaab militants killed in US airtsrikes 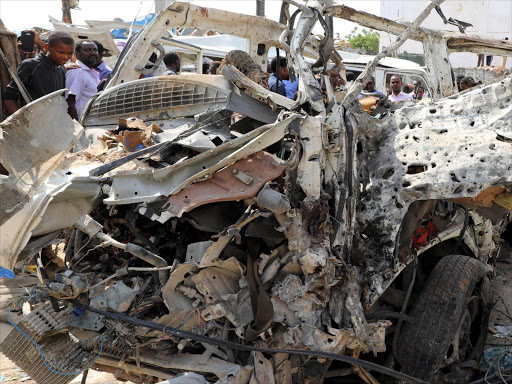 The wreckage of a van destroyed during a suicide bomb attack is seen near the Sahafi hotel in Mogadishu, Somalia November 10, 2018. /REUTERS

At least 37 al Shabaab militants were killed in a US airstrike on Monday, the

US Africa Command (AFRICOM) has said.

In a statement, the agency said they conducted two separate

"We currently assess the first airstrike killed 27 militants. This precision strike was a planned and deliberate action," it said.

"These precision airstrikes were conducted with the support of the Federal Government of Somalia as it continues to degrade al Shabaab," it added.

Fortunately, the airstrike did not injure or kill any civilians.

"The airstrikes reduce al Shabaab's ability to plot future attacks, disrupt networks and degrade its freedom of maneuver withing the region," it said.

During their meeting at the White House in August, President Donald Trump promised President Uhuru Kenyatta that the US government would strengthen efforts to rid East Africa of al Shabaab.

The US AFRICOM is responsible for military relations with nations and regional organisations in Africa.

from taking advantage of safe havens from which they can build capacity and attack people of Somalia.

"In particular, the group uses portions of southern and central Somalia to plot and direct terror attacks, steal humanitarian aid, extort the local populace to fund its operations and shelter radical terrorists," it said.

further said it will transfer the responsibility for long-term security in Somalia from Afican Union Mission (AMISOM) to the Federal Government of Somalia and its member states.