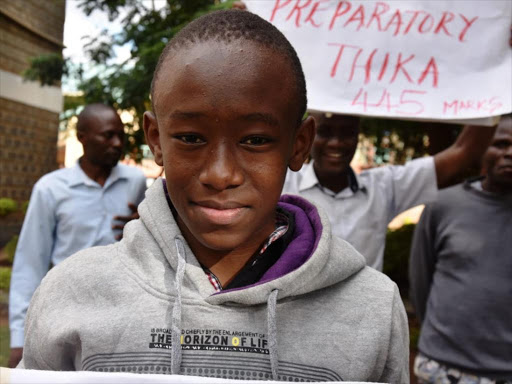 For Emmanuel Njenga, scoring 445 marks in the just-released KCPE results was one of the many miracles he has experienced since his birth.

The 14-year-old candidate from Stepping Stones preparatory school in Makongeni, Thika is a pre-term baby. He was born weighing 1.8kg, three months prior to his due date.

Njenga says he would want to join Alliance High School. He wants to be a neurosurgeon.

"There is no secret to performance. The only factor is focus and discipline," he happily said.

His father Michael Wathiomo said they almost lost hope after the premature birth of the now star performer.

"We fed him milk using syringes. He gained 10 kilograms in a span of two months."

"He has been a survivor and has fought his way to where he is now. We thank God because it was not our doing but His doing," Wathiomo said in excitement.

Njenga joined Stepping Stones preparatory at the age of three and a half years, naive, of featherweight, and unsure of what the future held for him.

"Despite his size and low weight, Njenga could do everything that his other normal pupils were doing," his father added.

His mother Lydiah Wathiomo said life has not been easy bringing up a Njenga. She recounted being ridiculed for birthing a seemingly 'abnormal child'.

"The results are just amazing. I cannot better express how I feel about my boy. We thank God for this success. We are just very happy," the woman said.

Chris Irungu, one of Stepping Stones preparatory school directors, hailed the teachers and pupils for the improved performance.

Over 40 out of the 100 registered candidates scored 400 marks and above, results the directors attributed to discipline, hard work, and responsible parenting.

A 13-year-old Grace Mwende Kamau outstandingly scored 438 marks at the same school. She told the Star of her dreams to become a doctor.