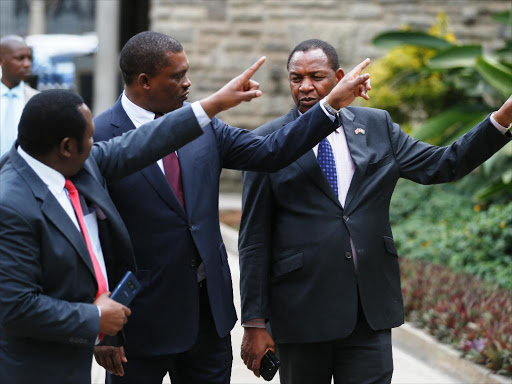 Powers and Privileges committee chairman Justin Muturi (C) with members peter Mwathe (L) and Vincent Tuwei point to the possible restaurant in parliament where the alleged bribery of members of parliament took place to shoot down the sugar report tabled in august by the joint committee of trade and agriculture. September 25, 2018. Photo/Jack Owuor

The National Assembly Powers and Privileges committee has recommended that the DCI and the Ethics and Anti-Corruption Commission investigate the sugar report bribery claims.

The committee, chaired by Speaker Justin Muturi, found there could have been cases of bribery based on oral submissions by the members who appeared it.

“There was therefore a possible breach of privilege and breach of the Code of Conduct by some members in terms of Section 16 of the Parliamentary Powers and Privileges Act, 2017, and also within the ambit of the criminal law,” the committee said in the report tabled on Tuesday.

In August, there were reports of bribery during the debate on the sugar report with a group of MPs saying they were approached with bribes to shoot it down.

Kiambu Woman Representative Gathoni wa Muchomba and Naivasha MP Jane Kihara recounted how MPs were approached to reject the report of the joint committee on Trade and Agriculture.

Wa Muchomba claimed some MPs were bribed in Parliament’s toilets while Kihara said some of her colleagues received the cash before the report was tabled.