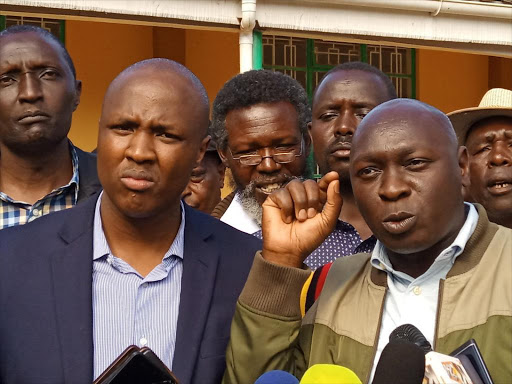 Three rebel Jubilee MPs now want DP William Ruto and his allies investigated over the maize and fertilizer scandals in the country.

They accused the DP of giving farmers false promises and asking them to grow alternative crops like avocado and cabbages.

The legislators said the DP should shelve his 2022 presidential ambitions and deal with problems affecting Kenyans first.

“In any case there is nowhere they are going with politics that do not benefit Kenyans”, Kuttuny said.

The MPs spoke on Saturday after attending a farmers' meeting in Eldoret town.

Keter said they had decided to tell the truth about the maize scams adding that only President Uhuru Kenyatta would be able to save farmers.

He claimed that Ruto and his allies were linked to the cartels that had been messing up farmers' issues.

“We want to tell the DP that we know the problems and cartels frustrating farmers are directly linked to him and his office and that is why we want all leaders probed. We are also ready as MPs to be probed”, Keter said.

The MPs said the DP recently visited Congo Brazzaville for more than a week where he allegedly planned how to start maize farming on a 500,000 acre land.

They claimed the maize would later be imported into the country and lead to further frustration of local farmers.

Tiren said that it is unwise to tell farmers to start avocado and cabbage farming yet Kenyans have not been told to stop eating ugali, their staple food.

"Let the audit begin right from the president himself just as he said, the DP and all the way down including me”, Tiren said.

He said anyone who knows he was involved in the maize scandal should be ready to go to jail.

The MPs said Rift Valley residents and Kenyans as a whole are not interested in numerous harambees by Ruto’s team while farmers and poor Kenyans are suffering.

The legislators declared that they were ready to play hard politics if that is what it will take to save farmers and poor Kenyans.

“All politics is local and we will now play it local”, Kuttuny said.

The director of Kenya Farmers Association Kipkorir Menjo said farmers will not accept government's proposed price of Sh2,300 per 90kg bag of maize.

He said Sh3,600 is the least they expect from the government, payable within seven days after every delivery.

"That was the price at which they imported maize, so why is it painful to buy maize from local farmers at the same price?" Menjo posed.

"Those coming here to tell us we should plant avocados and cabbages should be investigated to let us know what changed. They are playing games that are hurting our people," he added.