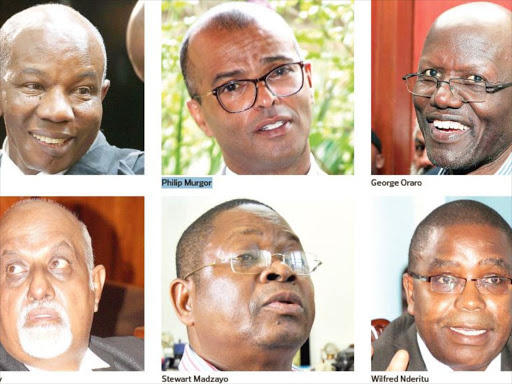 Former DPP Philip Murgor, Uhuru’s lawyer Fred Ngatia among those who want to be in DPP’s panel. /THE STAR

In a bid to secure successful prosecutions, Director of Public Prosecutions Noordin Haji is reviewing applications by high-profile lawyers seeking to be special prosecutors.

More than 100 law firms have applied and shortlisting is underway.

Murgor and Wilfred Nderitu, who is former chair of the Governing Council of the International Commission of Jurists (ICJ) Kenya.

"We hope to finish the process and draw up the final list by end of the week," Haji said on Friday.

Even as the DPP evaluates applications, there are concerns that some applicants may be less interested in securing convictions than in cutting deals for the accused.

"Some of these people want to be in the panel so they are perceived to be close to the DPP. Their interest is not about helping Haji win, all they want is to consult for corrupt people and strike deals," a senior lawyer told the Star. He has also applied to be in the panel.

The fight against corruption is atop President Uhuru Kenyatta’s agenda, together with the Big Four.

The DPP's Office was a big winner in the revised budget allocating it Sh2.9 billion to strengthen the war on corruption.

The DPP has numerous high-profile cases and has been on recruitment spree.

Some of the applicants are:

Founder and Senior Partner at Oraro & Company Advocates. With more than 42 years of experience, he is praised for his arbitration, mediation and litigation expertise. He specialises in administrative and judicial law, banking and commercial litigation, corporate and commercial law, employment and labour disputes, international trade and tax disputes.

Oraro led the defense team of former Cabinet Minister Henry Kosgey at the International Criminal Court. He successfully defended him after the ICC summoned Kosgey and five others suspected of masterminding the 2007-08 post-election violence.

He was also among the lawyers who unsuccessfully represented Raila Odinga's presidential petition in 2013.

Oraro has advised the Kenyan government on the financial and operational restructuring of Kenya Airways (KQ), including converting $2.3 billion into equity and the legal implications of relinquishing its security.

He also represented the Central Bank of Kenya in recovering more than Sh1 billion in Goldenberg-related cases.

A senior counsel and top lawyer, he successfully defended President Uhuru Kenyatta's disputed win in a petition filed by Cord in 2013 but lost in 2017.

— he is an expert in constitutional and judicial matters. He represented former Cabinet Minister George Saitoti and represented him at the Goldenberg Commission of Inquiry. His law firm is, however, among those being investigated by the Directorate of Criminal Investigations over non-remittance of money to the government.

He has been in practice since 1971, having graduated from the Kenya School of Law where he was awarded the Law Society Prize for the Best Academic Performance in 1970-71.

Bowry is renowned as a fearless practitioner in both civil and criminal litigation, having undertaken some of the most sensitive and politically volatile cases involving intricate legal issues.

He defended personalities including Chief Justices, MPs, Permanent Secretaries and Advocates. He has appeared in famous cases such as the Goldenberg Inquiry, the murder trial of Johanna Anguka in the 'Ouko murder trial' and the Makhalla trial involving the disappearance and murder of English girl Julie Ward in the Masai Mara.

Veteran Iten-born lawyer graduated in 1985 with an honours degree in law. He joined the Public Prosecutions Department until 1992 when he entered private practice with his wife Agnes Murgor to form Murgor & Murgor Advocates.

He did credible work for the CBK recovering stolen Goldenberg billions but got in trouble with the Moi government over the Grand Regency Hotel dispute, due to powerful vested interests. Threats to him and fees payment withheld by CBK forced him to quit the briefs. CBC appointed other advocates and suffered a string of defeats.

The Narc government of Mwai Kibaki in 2003 ordered all Goldenberg files be returned to Murgor to handle.

Kibaki in May 2003 appointed Murgor to be the DPP with a mandate to reform Public Prosecutions, which had been discredited under AG Amos Wako. He helped set up the Goldenberg Commission and commenced Anglo Leasing Prosecutions. He met his Waterloo, however, when he demanded a thorough investigation and prosecution of those involved in a Sh6.4 billion cocaine case. He was fired unceremoniously in an anonymous email from State House sent to media houses. After two months he received his termination letter thanking him for service to the nation.

Murgor is credited with initiating reforms that led to an autonomous DPP, and taking the difficult step of moving the DPP to the NSSF Building despite resistance from Muchemi Wanjuki, then the powerful Solicitor General, and his friends in the OP.

He describes himself as a persuasive litigator and negotiator. Nderitu graduated from the University of Nairobi with a law degree in 1988. He also holds a master's degree in International Relations from the Fletcher School of Law and Diplomacy, Tufts University in the US.

Nderitu, the managing partner at Nderitu & Partners in Nairobi, holds a certificate in conflict analysis from the US Institute of Peace. He practices international criminal and human rights law, especially law against genocide, crimes against humanity, civil and criminal litigation, insurance law, banking, conveyancing, corporate and commercial law.

Born in Nyeri, Nderitu has been an advocate for at least 24 years. He is among a few Kenyan lawyers on the prestigious list of qualified counsel at the ICC where he represented more than 300 victims of PEV.

His brief was to ensure international standards were maintained in procuring evidence on arrest warrants for Uganda rebel Joseph Kony.

The founder of Kimitei, Nthenge & Company Advocates. She graduated from the University of Nairobi with an L.L.B. degree,then proceeded to the Kenya School of Law. She is an advocate of the High Court. She is also a Certified Public Secretary and is currently pursuing a course to become an Arbitrator recognised worldwide.

The law firm is currently divided into two sections: Civil, Criminal Litigation and ADR and

The law firm was set up to fulfilling the legal needs of the people. The firm

consists of two advocates, one paralegal, one clerk and one office messenger.

The lawyer registered the Musa Juma & Company Advocates in 2007.

Previously, Musa Juma, Advocate was a co-partner in the firm of Wanyoike and Juma Advocates registered in 2001 before he left to head the legal department of Vegpro Kenya Limited, a leading horticultural producer and exporter in East Africa. He was head of legal services at Vegpro for eight years (2008-2015). He recently resumed active practice.

A lawyer for more than 15 year active practice and a Fellow of the Chartered Institute of Arbitrators, London (FCIArb). He is currently chairperson of the Chartered Institute of Arbitrators, Kenya. Kihara is a registered member of the Dispute Resolution Board Foundation, a non-profit organisation dedicated to promoting the avoidance and resolution of disputes worldwide.

He has holds undergraduate degrees in commerce and law and

pursued a master’s degree in law specialising in corporate governance at the University of Nairobi.

Kihara is a professional mediator and a Certified Public Secretary of Kenya. He is an approved trainer for the Chartered Institute of Arbitrators. He has extensive experience as a corporate lawyer, having worked for the GOK and state corporations as a member of senior management as of head of legal services and corporation secretary. He has been a consultant conducting due diligence for local and international companies.