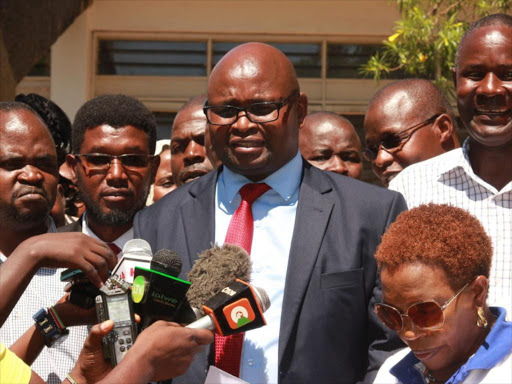 Kenya National Union of Nurses secretary Seth Panyako with other officials address the press after a meeting in Kisumu, November 16, 2018. /FAITH MATETE

They cited failure by the government to implement the return-to-work formula in a Collective Bargaining Agreement (CBA) reached in November last year.

They are also pushing for a Sh3,000 increase in nursing allowance in the first year and Sh3,500 in the two subsequent years as per the CBA.

KNUN also expressed its displeasure with the new job evaluation by the SRC.

Secretary Seth Panyako said in Kisumu on Friday that the evaluation is downgrading nurses as semi-skilled, adding that the category is lower than all other professionals in the country.

He spoke during a National Advisory Committee meeting.

Panyako asked SRC to move with speed and come up with a proper grading structure for the nurses.

"We shall not lie low like envelopes, we shall fight back and fight very hard," Panyako said.

Panyako claimed the accounts were introduced in IFMIS, hence, crippling the union financially.

He demanded a freeze of all accounts and assets of the said accounts.

The official said the DCI has concluded their investigation and have found the accused guilty and have forwarded the file to the DPP.

"Surprisingly, since January, the DPP has not found it fit to arrest and arraign the officials," he said.

The nurses further said they would not support calls for a referendum if the Health Service Commission will not be included as one of the questions.

Post a comment
WATCH: The latest videos from the Star
by By FAITH MATETE @faymatete
News
16 November 2018 - 15:00
Read The E-Paper