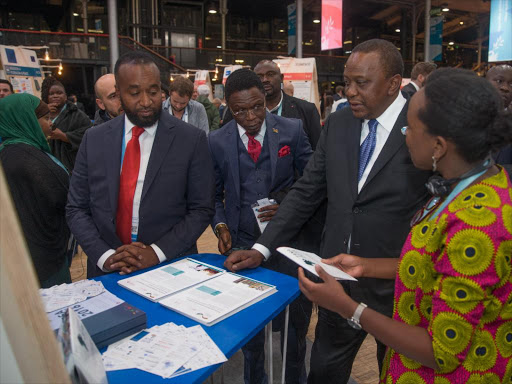 President Uhuru Kenyatta, Mombasa County Governor Ali Hassan Joho and Ministry of Foreign Affairs Chief Administrative Secretary Ababu Namwamba engage with Kenyans from Mombasa County who set up an exhibition stand at the Paris Peace Forum in Paris, France, ahead of the Kenya Week that will kick off on Tuesday./ PSCU

Kenya targets to attain 100 per cent transition to green energy by 2020, President Uhuru Kenyatta has said.

He said the government has scaled up investment in renewable energy to address climate change challenge concretely.

The President spoke on Sunday during a roundtable discussion on "Don't drop climate efforts" session of the Paris Peace Forum in France.

“To do even more, we need support from the Green Climate Fund and other mechanisms to enhance our green energy capabilities and accelerate adaptation and mitigation of the impact of climate change,” Uhuru said.

The President challenged governments of industrialised countries, where sustainability has been embraced, to support such investments in green energy in Africa.

He said doing so would help mitigate and even reverse the effects of climate change while delivering the jobs and opportunities that will strengthen security and stability on the continent and the world.

Uhuru emphasized that Kenya is open for business in the manufacturing of green technologies and will work hard to enable investors in this field to thrive.

President Uhuru spoke of the need for multilateralism to make its mark in solving major challenges ranging from insecurity, the fascism of global Jihadism, and the effects of climate change.

The Head of State said climate change is not an abstract threat in a far-off future but a defining security and development challenge of our time.

He said although African countries were nowhere close to the top producers of greenhouse emissions, they are nevertheless, champions of sustainability because they know the painful price of inaction in the face of climate change reality.

“It is driving patterns of movement and reaction to unusual and destructive weather patterns that are leading to mass violence, lost livelihoods, and a resulting appetite for large-scale migration,” the President said.

“We learnt terrible lessons in the past century when we sought to walk alone, rather than join hands in the enlightened solidarity of multilateralism,” the President said.