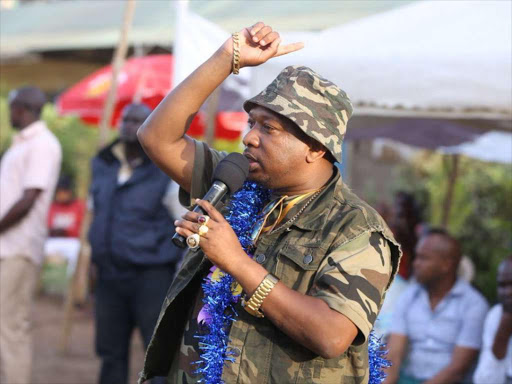 Nairobi governor Mike Sonko speaks at Matopeni in Embakasi Central during a fundraiser for Harrison Karanja on Saturday, November 11, 2018. Karanja was shot by gangsters /COURTESY

He said on Saturday individuals who heed the call will get jobs and protection.

Sonko spoke at Matopeni in Embakasi Central during a fundraiser for Harrison Karanja.

Karanja was shot by gangsters in Kayole. His hospital bill has accumulated to Sh6.8 million. Sonko helped raise Sh5.1 million.

At the same time, Sonko said the groundbreaking ceremony for 200,000 affordable housing units will be done next week.

Sonko said the launch will be done in Pangani.

Thereafter, the project will be rolled out in old and new Ngara, Jeevanjee-Bachelors, Ngong Road Inspectorate staff quarters, Uhuru and Suna Road.

Sonko said he will not relent in the war against corruption.

"No one will live in squalor under my administration and I will not allow corruption to thrive under my watch," he said.

Post a comment
WATCH: The latest videos from the Star
by STAR REPORTER, @TheStarKenya
News
11 November 2018 - 09:00
Read The E-Paper