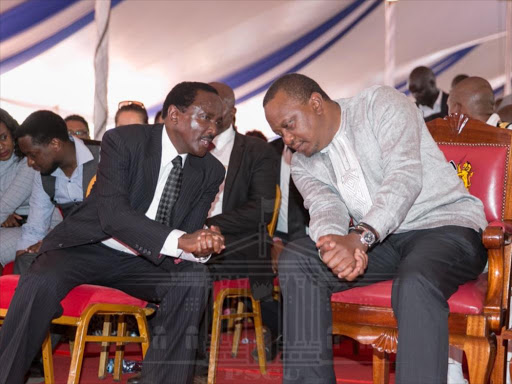 President Uhuru has a word with Kalonzo during the burial of his father, the late Mzee Peter Musyoka, yesterday/Courtesy

Wiper Leader Kalonzo Musyoka is poised to become a special peace envoy, the Star can reveal.

Sources close to State House told the Star confidentially that President Uhuru Kenyatta was considering appointing Kalonzo as a special envoy to mediate in conflicts locally as well as outside the country where Kenya’s help will be required.

Yesterday, while speaking at the burial of Kalonzo’s father in Kitui, President Uhuru Kenyatta fell short of announcing the appointment.

“Nashukuru kuwa Raila (Odinga) amepewa kazi kule AU.... ataweza kuchangia huko na hiyo pesa nyingi si ataleta hapa kwetu tu? Kuna ubaya hapo wenzangu? (Loosely translated: I’m grateful that Raila has been given a job by AU...He will be able to contribute here and don’t you think he will bring some money to Kenya? Is that wrong my brothers?).

“My brother Kalonzo should help us to bring the country together and peace for all Kenyans and even internationally. Every leader has something to contribute…all we need is to give each other space and respect one another!”,

Kalonzo appeared to suggest that he would accept the appointment if it came when he stood to give a vote of thanks.

(Loosely translated: I want to announce today that I will never be able to repay Uhuru for the respect he has shown to me and my family. From today, let no one separate me and my brother Uhuru. I have accepted to run his errands).

Kalonzo has previously been involved in mediation efforts in Somalia and South Sudan. In the case of Somalia, the former Vice President worked with various warlords to reach a peace accord.

His biggest success was however registered in South Sudan where, together with General Lazarus Sumbeyio, he helped to end the long-running conflict when Khartoum eventually accepted to allow South Sudan break away.

Earlier, politics of unifying the country to realise development took centre-stage during the burial service for Mzee Musyoka Mairu in Kitui county.

The late Mairu passed on at the Nairobi Hospital on October 29 aged 94. He was buried at his Tseikuru home in Kitui.

Leaders from across the political divide said the handshake between President Kenyatta, Raila Odinga March 9 handshake will help the country to progress.

Uhuru noted that the country’s economy cannot grow amid political wrangles among leaders as citizens are the ones who suffer when they clash.

“Let’s unite and work together. Every leader has something to contribute and we should only give each other space to work. There is no leader who can oppose development and we must deliver as one,” Uhuru said.

He reiterated that leaders should shun divisive politics and embrace politics of ideologies where any leader seeking the presidency can campaign anywhere in the country without obstruction.

“I am ready to walk with any leader who is wiling to change the lives of Kenyans,” he said, urging all to emulate the late Musyoka Mairu.

Raila expressed optimism that the pact which led to the formation of a 14-member Building Bridges Initiative team to champion unity in the country will bear fruit.

The ODM leader who was recently appointed by the Africa Union as a Special Representative for Infrastructure, however, condemned the rising chaos in county assemblies occasioned by MCAs seeking to impeach speakers.

“Chaos is not service to the people. The chaos must end because they are tarnishing the image of devolution,” Raila said, linking it to MCAs pressurizing county leaders including speakers to bow to their demands for big vehicles and foreign trips.

ANC leader Musalia Mudavadi backed Uhuru and Raila’s call for unity but told the President to “save” Kenyans from huge public debt.

“Kenya is for all of us. You were the Finance minister and now the President, help us from the debt. We don’t want to go into hiding because of creditors,” Musalia said.

Mudavadi told the President not to relent in the ongoing fight against corruption that has cost Kenyans billions of shillings through mega-scandals such as the National Youth Service.

However, Uhuru, hit back saying there is no problem with borrowing for development as long as the money is not misused or used to pay salaries.

“If we focus on expending this country through infrastructure, the economy will grow. We are not borrowing to consume but to grow,” he said.

Deput President William Ruto termed the late Mairu as “an outstanding Kenyan” worth to be celebrated and imitated and said it is time for leaders to serve citizens in transforming their lives after the divisive 2017 elections.