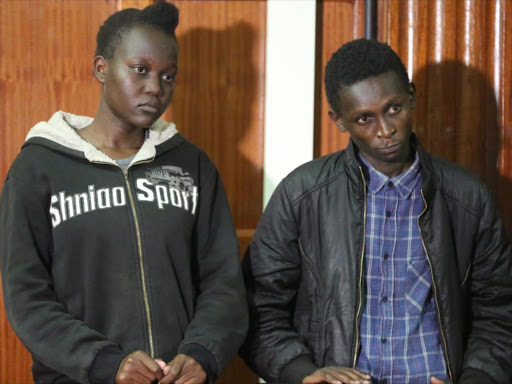 Two employees of the fake doctor Mugo wa Wairimu were on Thursday charged with operating a pharmacy and laboratory without a license.

were also charged with operating a lab without a license from Kenya Medical Laboratory Technicians and Technologists Board.

The two were arrested after flying squad's head of operations John Njoroge and his team stormed the clinic with Kenya Medical Practitioners and Dentists Board CEO Daniel Yumbya on.

Victor was found attending one of the patients at the clinic.

They denied the charges before senior principal magistrate Martha Mutuku

The suspect studied for clinical medicine at KMTC Siaya campus and completed in July and is due to graduate next month.

Ogony is a first-year student of Kiriri Women's University of Science and Technology in Githurai where she is pursuing a Diploma course in procurement.

Her lawyer Janes Mochere said she had gone to visit someone at the clinic.

She was visiting her elder sister who works as a receptionist at the clinic.

Mutuku remanded them until Thursday to await a pre-bail report before setting bond terms.

Police are still looking for Mugo after he was named as the owner of the clinic.

In 2015, Mugo was arrested and charged with various offences linked to operating an illegal clinic in Githurai 44, Nairobi and raping a woman he had allegedly sedated

at Prestige Healthcare Clinic on November 1, 2014.

The prosecution also accused Mugo of operating a pharmacy not registered with the Pharmacy and Poisons Board.

Post a comment
WATCH: The latest videos from the Star
by JOSEPH NDUNDA
News
08 November 2018 - 15:00
Read The E-Paper