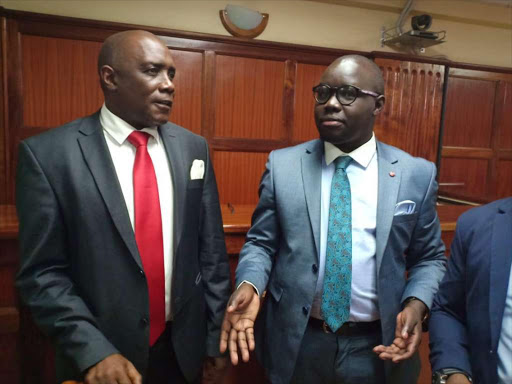 NLC chairman Muhammad Swazuri with one of his lawyers at the Milimani law court on Thursday, November 1, 2018. /COLLINS KWEYU

A fallout among commissioners and other top officials is threatening to paralyse operations of the National Land Commission.

Tension was high yesterday after the High Court allowed chairman Muhammad Swazuri to return to the commission unconditionally.

Sources told the Star yesterday that the court order ‘reinstating’ Swazuri had heightened anxiety as staff are divided by their loyalty to different bosses.

It remains to be seen how Swazuri will chair board meetings amid allegations that some of the commissioners are lined up to testify against him.

Justice Hedwig Ong'udi of the Anti-corruption Court ruled that unlike other public officers who are suspended upon being charged with corruption and economic crimes, constitutional office holders like Swazuri are exempted by virtue of section 62(6) of the ACECA laws.

Swazuri, an associate professor of Land Economics, had the last laugh after the High Court lifted stiff conditions imposed on him by the Magistrate’s court over two months ago.

The conditions followed his being charged with abuse of office over alleged dubious compensations for standard gauge railway land.

The chairman has had a frosty relationship with some staff, including Vice Chair Abigael Mbagaya Mukolwe, whom he has accused of orchestrating his trial and ouster from the helm of the commission.

Mbagaya swiftly assumed the position of acting chair after Swazuri, Kenya Railways MD Atanas Maina and 9 others were arraigned in court in connection with the payout of Sh222,375,000 for land acquired for the railway.

"The fact that the person reportedly taking over as chairperson of the NLC not only orchestrated my arrest but we have evidence of her corrupt acts as vice chair make it untenable to allow this state of affairs to continue," Swazuri explicitly stated in a letter to Head of Civil Service Joseph Kinyua on August 14.

Swazuri claimed that Mbagaya took advantage of his absence to stage a coup and gladly told the media that the commission was fully constituted even in his absence.

"All these are clear indications that the aim of the pending court case was to replace me through the back-door, outside constitutional and statutory provisions," he protested.

Swazuri also claimed that his woes were engineered by a commissioner he did not name but whom he said “has persistently been pursuing a negative agenda against the commission” and him.

The prosecution had indicated that at least 7 staff of NLC will testify against Swazuri.

NLC is racing against time to make key decisions before its term expires next year.

These include a determination of whether to revert the Weston Hotel Land owned by Deputy President William Ruto back to the Kenya Civil Aviation Authority, as well as compensation for other ongoing phases of the SGR.

National Land Alliance chairman Odenda Lumumba told the Star NLC is virtually dysfunctional and some of its decision reek of “rent seeking”.

"There have also been petitions that I am at least privy to against Swazuri, Mukolwe and [Commissioner Abdulkadir] Khalif.

In that circumstance and given the fact that the commission has been more fractious than a working unit, we basically think that it does not really have anybody’s confidence in what it is doing," Lumumba said.

In a separate court duel, Munubi has accused Mbagaya and NLC legal officer Brian Ikol of giving a false statement that implicated them in the alleged theft.

She has asked the court to order the DPP to charge Ikol and Mbagaya with perjury.

According to Munubi, the criminal proceedings are meant to settle personal vendetta between Swazuri and Mbagaya.

He was the director of land information management system.

Although he was allowed to go back to court, Justice Hedwig Ong’udi directed Swazuri not to interact with and interfere with the witnesses at his work place or any other witnesses.

Swazuri is also required to make an undertaking not to interfere with the records and documents relevant to the case as that would lead to automatic cancellation of his bond.

Ong'undi ruled that according to that law, a constitutional office holder can only be removed from office if he resigns or is convicted of a criminal offence. Swazuri therefore remains NLC chairman as his case is ongoing in the anti-corruption magistrate’s court.

The judge set aside orders issued by anti-corruption court’s Senior Principal Magistrate Lawrence Mugambi barring Swazuri from accessing his office unless he had authorization from the chief executive of the Ethics and Anti-Corruption Commission.

"From my analysis above and especially on the issue of operationalization of the order in respect to Swazuri, I am satisfied that the trial court did not assess the practical impact of the orders it gave in respect to him," Justice Ong’udi held.

The judge said that the purpose of setting aside the orders of the lower court was to make it practical for him to carry out his official duty and not earn a full salary for doing nothing.

Ong’udi said that there was a big conflict of interest in the operation of the order by the magistrate because the secretary or CEO of EACC could be seen to be controlling the affairs of the NLC yet both are independent commissions.

"Assuming for a minute that Swazuri wanted to be in his office everyday would it be practical for EACC to be consulting and issuing authorization on a daily basis?" the judge posed.

The judge said if any of the parties refused to authorise, it would mean that Swazuri does not go to the office.

But in a new affidavit filed in court in response to a case filed by three of his co-accused, EACC now claims that Swazuri single-handedly micromanaged the NLC and disregarded a critical committee in awarding millions to dubious firms in the SGR compensation.

EACC says Swazuri usurped the powers of CEO Tom Chavangi who ironically is his co-accused in the SGR compensation case.

"That in a further indication of the fraud, investigations established that by granting authority to process compensation the chairman was usurping the role of the CEO of the NLC," says Joel Alfred Mwendwa, the investigator in a sworn affidavit filed on October 26, 2018.

The affidavit is in response to an application by Peter Mburu, Caroline Kituyi, and Gladys Munyanga, seeking to be absolved of the charges.

"This marked the completion of the fraudulent scheme to defraud the taxpayer colossal sum in a dubious compensation process," Mwendwa states.