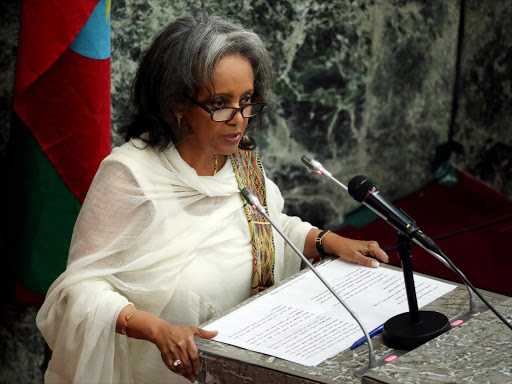 "I am elated for Zewde on her election earlier today to the position of President of the Federal Republic of Ethiopia. It is a historic moment for the people of Ethiopia, Africa and indeed the whole world," he said.

Zewde, a career diplomat and international civil servant makes history as the first female President of Ethiopia and joins the expanding league of distinguished African women to occupy the apex office on the continent.

were former Presidents Ellen Sirleaf Johnson of Liberia and Joyce Banda of Malawi.

"Zewde election is a resounding demonstration of the changing fortunes for the indefatigable and distinguished women of Africa..." Uhuru said.

Previously, Zewde was the Director General of the United Nations Office at Nairobi (UNON), a role that saw her hold meetings with His Excellency President Kenyatta on numerous occasions.

"When Zewde served in Nairobi as the Director General of UNON, we held several fruitful consultative meetings and developed a great working relationship. It is this relationship that I look forward to strengthening as we work together for the mutual benefit of our two countries," Uhuru added.

Post a comment
WATCH: The latest videos from the Star
by STAR REPORTER, @TheStarKenya
News
25 October 2018 - 15:00
Read The E-Paper