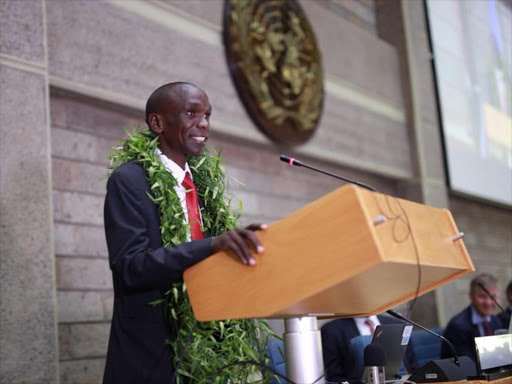 Kipchoge was awarded by the United Nations office in Nairobi on Wednesday by Foreign Affairs CS Monica Juma.

for his extraordinary performances, his work on HIV/AIDS in Kenya, and

his endurance and courage.

Juma said he was awarded for his athletic heroism and determination to advance the spirit of sports.

was feted as the United Nations celebrated

The Dutch Embassy was among the first to laud Kipchoge.

on winning the UN in Kenya Person of the Year award for his work on combating HIV/AIDS.”

On Tuesday, Kipchoge was nominated for the 2018 IAAF Male Athlete of the Year award amongst other athletes.

The 10 nominees were selected by an international panel of athletics experts, comprising representatives from all six continental areas of the IAAF.