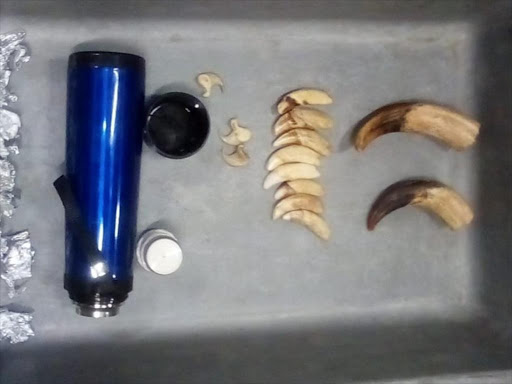 The wildlife products seized from a Vietnamese national at the JKIA on Monday, October 22, 2018. /KWS

A Vietnamese national was on Monday arrested for being in illegal possession of eight lion canine teeth, three lion claws, and two warthog teeth at JKIA.

He was smoked out by Kenya Wildlife Services sniffer dogs stationed at the airport, specifically to detect contraband wildlife products on transit.

"Trung Hieu was on transit from Liberia on KQ 505 to Bangkok through JKIA," a statement from KWS corporate communications said.

The foreigner was booked at JKIA police station and is expected in court on Tuesday.

The arrest comes hot on the heels of the just-ended 70th meeting of the United Nations Convention on International Trade in Endangered Species (CITES).

The meeting approved Kenya’s exit from a group of countries with global concern on wildlife trafficking, infamously referred to as the gang of eight.

Kenya was one of the parties that had successfully participated in the NIAP process since May 2013 and substantially achieved its requirements.