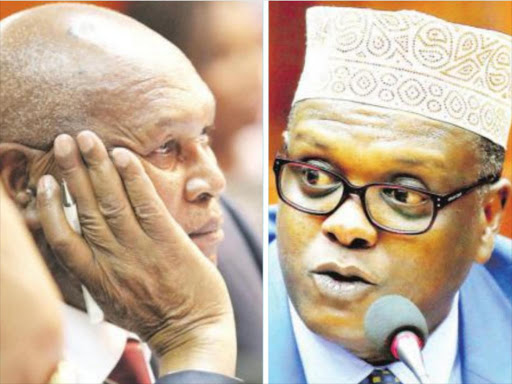 Legendary athlete Kipchoge Keino will not face criminal charges in relation to the 2016 Rio Olympics scandal.

He will, instead, be a state witness against former Sports Cabinet Secretary Hassan Wario and others who have been charged with impropriety in the scam.

Director of Public Prosecutions Noordin Haji had approved charges against Keino who was due to appear in court this morning over the loss of Sh50m. He was also expected

to be charged with abuse of office and wilful failure to comply with laws relating to public funds management.

But things changed yesterday after he presented himself at the DCI and recorded a fresh statement in which it emerged that he was never a signatory to any account and neither did he receive any money.

“We are reviewing some issues over emerging details that will see Kipchoge Keino become a witness. He never signed documents,” John Kariuki, the head of investigations at the Directorate of Criminal Investigations said yesterday.

Keino, 78, is a two-time Olympic champion and an honorary member of the International Olympic Committee.

He was among the first athletes to be inducted into track and field hall of fame in 2012.

He is veteran athlete and mentor of generations of Kenyan long distance-running champions. He won gold in the 1,500 meters at the 1968 Mexico City Olympics.

Pressure had been mounting from mainly Rift Valley politicians and other influential opinion leaders on President Uhuru Kenyatta to intervene and save the athletics' icon legend from an embarrassing court appearance since he was named by the DPP on Friday last week.

Apart from Rift Valley politicians who held press conferences earlier this week to intervene for Keino, it is understood

that international sporting organizations like the International Olympic Organisation, IOC, intervened with senior government officials in the athlete’s favour.

"I know Keino very well and there is no way he could have taken anyone's money. We are happy that the investigators have agreed with us that Keino has no case to answer," said Soi MP Caleb Kositany.

As a result of yesterday's developments, police will now charge Wario, who was four months ago appointed Kenya’s ambassador to Austria, Haron Komen and Patrick Nkabu who turned themselves in yesterday.

Keino was in Sweden to receive an award when the order to prosecute him was issued while Wario was in Vienna. He returned on Wednesday night in time for the deadline issued by anti corruption court magistrate Douglas Ogoti to present himself to police by Thursday, 6am. He promptly reported to DCI offices yesterday morning where his statement and finger prints were taken in preparation to be charged today.

He was directed to present himself before court this morning. Unlike the previous three co-accused, he was not detained to spend the night in police cells.

Wario is facing six counts of abuse of office including improperly conferring a benefit to six individuals who travelled to the Rio Olympics funded by the tax payer at a cost of Sh5.4 million.

Yesterday, several politicians from Rift valley were reportedly spotted at the DCI headquarters before Keino was released.

Keino presented himself to the Economic Crimes Unit at the DCI headquarters on Kiambu road yesterday morning as required. He was questioned and allowed to leave as the investigators consulted further on the case.

His inclusion in the list of those targeted for prosecution over the Rio scandal came as surprise to many. Last week, the Star exclusively revealed how top State House officials stopped the prosecution of then CS Wario in 2016.

State House political strategists feared it would stir reprisals from the communities of the CS and PS Ekai months before President Uhuru Kenyatta faced a re-election duel against his political rival, Raila Odinga, at the August 2017 General Election.

Former DPP Keriako Tobiko had directed then DCI Muhoro Ndegwa to arrest and prosecute Wario and Ekai over the scandal after investigations were completed. At the time, only the two were to be charged.

The management of the Kenyan team and the poor performance had drawn national anger, with the President directing a thorough investigation into allegations of misappropriation of funds.

The investigation was concluded and the file handed over to the Director of Public Prosecutions with recommendations to charge the CS and PS.

Then head of Economic Crimes Unit Odhiambo Kamulus recommended that journalists from various media houses, who had received stipends from the Sports ministry

to cover the event, be compelled to refund the money or face prosecution as well.

Wario will be the last to be charged, after the other three former officials appeared in court on Monday.

They were released on a Sh2 million

bond with a surety of a like sum each and alternative Sh1 million bail each and ordered to surrender their travel documents to the court. Ekai was allowed to travel to Moscow, Russia, to hand over the office.

Post a comment
WATCH: The latest videos from the Star
by KAMORE MAINA @kamoremaina
News
19 October 2018 - 06:00
Read The E-Paper