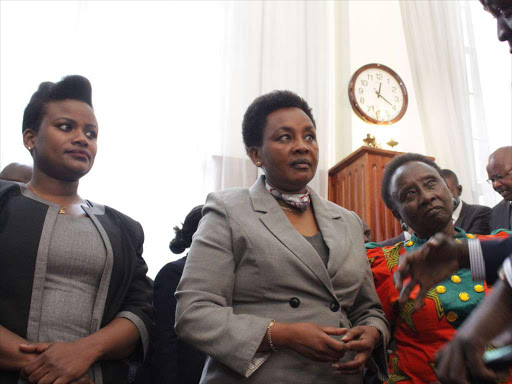 Deputy Chief Justice Philomena Mwilu will on October 17 know if her Sh12 million graft case will be heard by a three-judge bench of the Anti-Corruption Court.

ruling on the DPP’s application to the said date and

"In my view, extending the orders is for the public good and to meet the ends of justice," Justice Mwita said.

The conservatory orders preventing any criminal proceedings against Mwilu expired on Tuesday.

The DPP, through Secretary of Public Prosecution Dorcas Oduor, opposed the extension saying the orders issued on August 29 were ex-parte and did not give further directions on what would follow.

Justice Mwita, however, said failure to extend the orders will cause the question of substantial importance of the law that the matter raises to become even more moot.

This, he said, poses the danger of the DPP “pulling a fast one” by proceeding to prosecute Mwilu even before a decision on constituting a three-judge bench is determined.

In its submissions, Mwilu’s legal team led by James Orengo and John Khaminwa said the DPP is seeking to abuse his prosecutorial powers by criminalising civil and commercial matters.

Mwilu was charged with abuse of office, failure to pay stamp tax, improperly obtaining Sh12 million from Imperial Bank, and obtaining security for a loan by false pretence.

Lawyer Okong’o Omogeni, who made submissions on behalf of her legal team, said the DPP has ulterior motives by applying selective justice which is discriminative to the DCJ.

He said the issue can be heard and determined by a single judge.

"This is just an attempt by the applicants to delay the hearing of this case. We pray that this notice of motion be dismissed with costs," Omogeni said.

He further argued that subjecting the DCJ to criminal proceedings amounts to instituting her unprocedural removal from office.

Oduor and Solicitor General Kennedy Ogeto, however, argued that subjecting the deputy chief justice to a criminal process does not necessarily mean it will lead to her removal from office.

They further affirmed that the matter is of high public interest as it touches on the office of the Deputy Chief Justice.

Oduor told the judge that the matter raises substantial issues of law including whether a judge accused of a criminal offence should be treated differently from an ordinary person accused of the same crime.

She said Article 165 (4) of the Constitution provides for the empanelling of three or more judges to hear a matter that raises a substantial question of law.

The article says: "Any matter certified by the court as raising a substantial question of law under clause (3) (b) or (d) shall be heard by an uneven number of judges, being not less than three, assigned by the Chief Justice."

Oduor countered the argument by Mwilu’s legal team that shifting the matter to the Anti-corruption Court infringes on her rights.

She said Clause (3) (b) grants the High Court jurisdiction to determine the question whether a right or fundamental freedom in the Bill of Rights has been denied, violated, infringed or threatened.

This, she said, can be heard by the three-judge bench.

She further said that Section 6 (i)(c)

High Court Organisation and Administration Act says the principal judge is responsible for empanelling more judges in consultation of the Chief Justice.

"We have placed on record that we have sufficient support by the law and the Constitution for this matter to be referred to the Chief Justice for the empanelling of more judges or an even bench of judges," Oduro said.

Ogeto said Article 6 of the Constitution as well as Chapter 6 on the Integrity Act provides room for a sitting judge to be subjected to criminal proceedings.

He said the prosecution can proceed to institute criminal proceedings against a sitting judge in a situation where the JSC has not taken any action against that particular judge.

Ogeto further told the court that Mwilu had failed to prove that criminal prosecution of a judge amounts to encroachment on the independence of the judiciary.

He said the DPP, DCI, EACC, KNCHR and the Office of Administrative Justice have a constitutional right to institute criminal proceedings where a judge, who enjoys security of tenure, is suspected of having committed a prosecutable crime.

Post a comment
WATCH: The latest videos from the Star
by EMMANUEL WANJALA @ItsWanjala
News
09 October 2018 - 12:00
Read The E-Paper