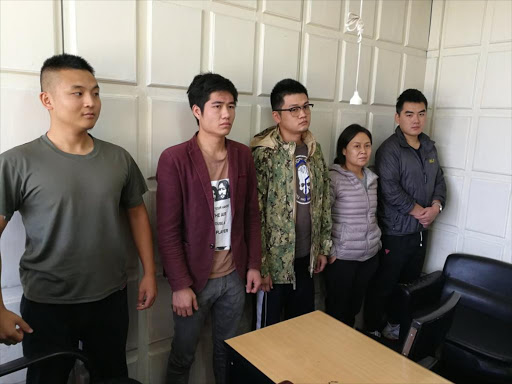 The five Chinese nationals arrested with military equipment at an apartment in Lavington, Nairobi on Friday, October 5, 2018. /COURTESY

Alexander Muteshi, director of Immigration Services, said officers swiftly acted on a tip-off from members of the public who were concerned about suspicious activities at the premises.

He said the officers recovered from the suspects, items believed to be a threat to national security.

They were radio phones, military uniforms, laptops metal detectors, walkie-talkies, tear gas canisters, a pair of US army uniform, smoke detectors, and laptops among others.

Muteshi said the lot claimed that they were planning to open a security firm but preliminary investigations showed that they have no work permits.

"All of them are in the country on tourist visas. They will be detained for some time as the security agencies do further investigations," he said.

He said the five have also been using hired vehicles for their unknown operations.

Interior CS Fred Matiangi confirmed that the foreigners have been taken to the DCI Headquarters for further interrogation.

"The investigation is to ascertain their true intentions with the sensitive material in their possession," Muteshi added.

He also reiterated that the ongoing crackdown on illegal immigrants will be sustained in the best interest of the country.

On September 19, Immigration officers arrested 15 Chinese in a brothel in South C estate on grounds they have been engaging in prostitution.

The arrests elicited mixed reactions from Kenyans with some questioning how the lot got in the country in the first place.