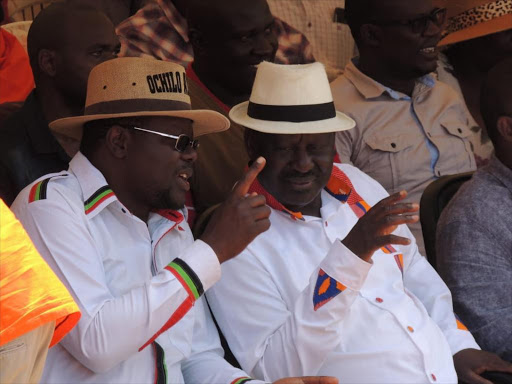 ODM leader Raila Odinga on Thursday maintained that Kenya will go to a referendum if it has to realise the goals of the Building Bridges initiative.

He said the calls for a referendum, to change the structure of government, are tied with peace initiative which followed the March 9 handshake.

Raila entered into a post-2017 poll truce with President Uhuru Kenyatta in a 9-point agenda towards building lasting unity and peace in the country.

The peace process followed the disputed August and October 2017 presidential election. Raila and his allies boycotted the second round of the polls.

He told Migori residents during a rally in support of ODM Senator candidate Ochillo Ayacko that changes expected after the plebiscite is for Kenya's good.

"The referendum calls are to make the 2010 Constitution better and stronger, and most importantly to safeguard the supreme law," Raila said.

Migori is set to elect a new senator on Monday, a poll which was occasioned by the death of Senator Ben Oluoch Okello.

Raila said the Building Bridges team will collect views from all Kenyans on how best the Constitution should be changed.

The former prime minister said the calls for Constitution change is among major issues that the handshake will seek to rectify.

"The vote will help safeguard the President's legacy and chart the country in the right path for a better future," Raila said.

He cited strengthening devolution to make it stronger and work better for Kenyans as among the changes.

Others will be a change in the structure of the Executive "to lessen the burden on taxpayers."

"We will also seek to safeguard the environment under the referendum where Kenyans will give their views on how best to move forward on the matter," he said.

Raila said those who are against the call for a referendum should step aside "as they don't have the country's interests at heart."

In a swipe at the dissidents, Raila said: "nobody can stop an idea of whose time has come like the call for the referendum."

"Those who are opposed to the changes must prepare to be defeated when the vote is called," Mbadi said.

Junet said: "We will prove to the opponents that the call for the referendum will sail through."

Post a comment
WATCH: The latest videos from the Star
by MANUEL ODENY @ManuelOdeny
News
04 October 2018 - 15:00
Read The E-Paper