Inside Tanzanian tribe who must fight to preserve way of life 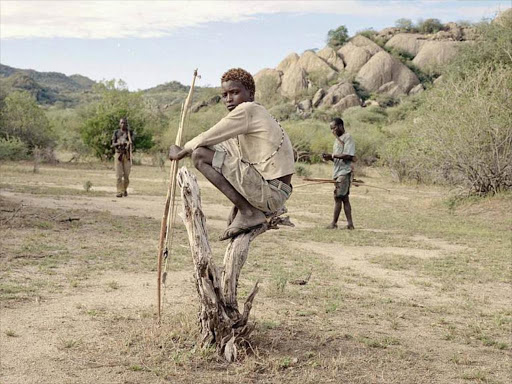 Members of a Tanzanian tribe who have lived as hunter-gatherers for 10,000 years are coming under threat and fear they will be forced to adapt to Western society.

The Hadza tribe must find a way to secure their land rights, in order to have access to unpolluted water springs and wild animals to hunt in the East African country.

The tribe, who have their own language only loosely related to other languages in the region, have been pictured at their home on the shores of Lake Eyasi, in the Ngorongoro district in the north of the country.

It is believed there are a little over 1,000 Hadza people remaining, forming one of the last hunter-gatherer communities still in existence, and living close to the site of some of the very earliest human remains.

The tribe's food includes the

fruit of the baobab tree, which is crushed to make a citrus-flavoured milkshake, wild tubers tasting similar to turnips and celery, and meat from animals including baboons and porcupines.

A King's College London professor who visited the tribe last year said they had the healthiest guts in the world, as their diets allowed them to grow a diverse range of digestive bacteria.