Obado admitted to KNH after bout of severe stomachache 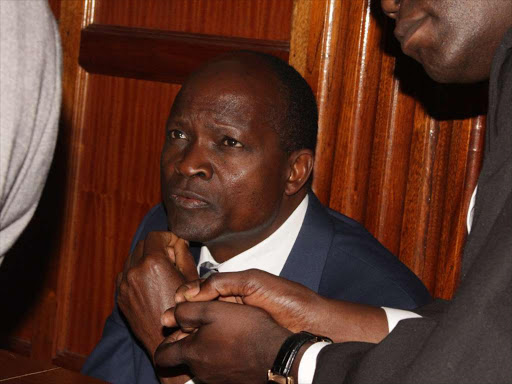 Migori Governor Okoth Obado at a Milimani court on Monday, September 24 where he was charged with the murder of 26-year-old Rongo University student Sharon Otieno. /COLLINS KWEYU

Migori Governor Okoth Obado has been admitted to Kenyatta National Hospital after he reportedly fell sick while in remand at the Industrial Area prison.

According to police sources, the governor was admitted to the KNH private wing on Wednesday at 10am.

He was complaining of severe stomachache when he was taken to the hospital, an officer told the Star on Wednesday.

Migori Governor was at the Industrial Area remand.

denied bail in the murder case involving Rongo University student Sharon Otieno. He will be at the facility until October 8.

denied murdering Sharon, a case emanating from the student's abduction and subsequent murder on September 4.