Down to earth Swiss President sitting on pavement excites netizens 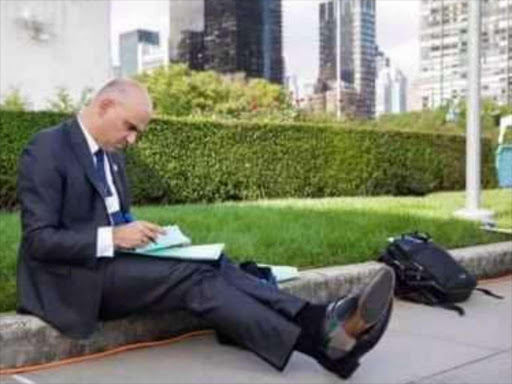 Swiss President Alain Berset reading his notes on the pavement in New York City during the UN General Assembly. /COURTESY

A photo of the Swiss President sitting on a pavement in New York during the UNGA general assembly has excited netizens.

President Alain Berset excited Kenyans in June he tweeted in Kiswahili to announce his trip to the country.

Social media users lauded his humble way of leadership, saying it is not about red carpets and motorcades.

"Swiss President Alain Berset reading his notes on the pavement in NYC during #UNGA. He tweeted to Kenyans in Kiswahili during his visit to the country in July," read a tweet.

Masinde Johnson wrote a great picture worth emulating by our leaders who surround themselves with a large number of bodyguards at the taxpayers' expense.

Dancun Makori said, "Simplicity at its best. Swiss President Alain Berset reading his notes on the pavement outside the United Nations HQ in New York during the 73rd general assembly! In Kenya, Governors with fake papers must be treated and addressed as "Mtukufu Gafana".

He used a train to Philadelphia for a discussion on direct democracy.

spokesman Markus Binder said it is true that Berset cooked his meals while in the US.

"It is not true that President Berset stayed in a small apartment during his visit to New York and cooked his own meals," spokesman Markus Binder said.

Berset used to stay in a hotel as usual. The meals he had taken there or in the context of working meetings with other government representatives.

According to Binder, Berset was at least partially walking in New York, "including from the UN headquarters back to the hotel".

Post a comment
WATCH: The latest videos from the Star
by LILLIAN MUTAVI @LillianMutavi
News
03 October 2018 - 15:00
Read The E-Paper