How police are linking Jacque Maribe to Monica Kimani's murder 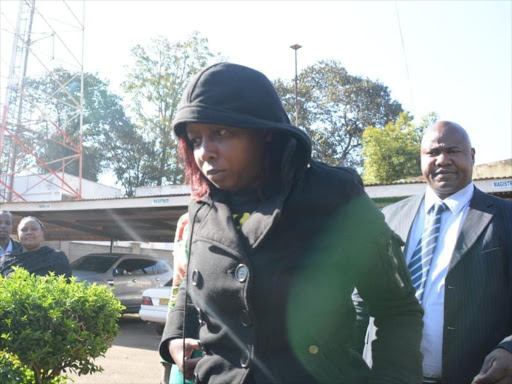 Detectives have revealed part of the evidence they are seeking to link Citizen TV journalist Jacque Maribe to the murder of 28-year-old Monica Kimani.

In an affidavit filed in court, the officer investigating the case Maxwell Otieno says Maribe knowingly assisted the main suspect Joseph Irungu in a cover-up.

Irungu alias Jowie, who is Maribe’s fiancee, is being detained following a court order for police to complete investigations.

In the affidavit, Maribe told detectives that Jowie attempted to commit suicide on the night of September 20 and 21 at around 1 am

by shooting himself after a serious disagreement between the two.

After he shot himself, Maribe said he rushed out to a house belonging to another suspect.

The suspect whose name has been concealed told the police that Jowie woke him up and told him to go and secure the gun at Maribe's house.

The suspect rushed to the house and found a bullet of 9mm and one spent cartridge on the floor at the entrance to the master bedroom.

Maribe recorded a statement at the Lang'ata police station in regard to the said shooting incident and alleged that Jowie had been shot at by three-man gang who were on a motorbike near the gate of their residence.

“Some of the key exhibits in the case i.e Kanzu and a jacket were partly burnt at the residence of the respondent and it believed that this was done with the respondent's full knowledge,”

During the time of arrest, they recovered several items which included shoes and several pieces of clothing and a well-detailed inventory was recovered.

“Among the items recovered they are yet to be subjected for forensic examination by the government analyst,” read the affidavit.

Maribe's mobile phone, iPhone 7+ with a Safaricom Card was seized.

The DPP had previously recovered one 9mm live bullet (ammunition).

“That the said motor vehicle mentioned was seen on the CCTV footage at the crime scene and was driven by Joseph Kuria Irung alias Jowie,”

read the affidavit in parts.

The investigation so far shows that one of the suspects gave out a firearm to Jowie on several occasion and one of such occasion was on September 9.

Jackie will be detained for 11 more days at the Gigiri as police continue investigations into the murder of Monica Kimani continue.

The detectives said that they will extract DNA samples from the Maribe for the purposes of the comparison with a sample taken at the scene of her residence.

The prosecutor told the court on Monday that the reason to ask for her to be detained is that they feared following the huge following and being a media personality can interfere with the investigation.

They also stated that she was a flight risk and should remain in custody pending the conclusion of investigations.