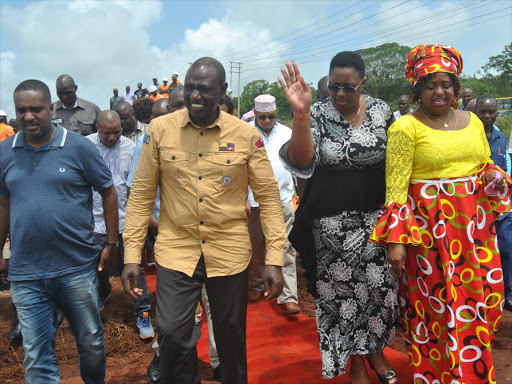 Msambweni MP Suleiman Dori and his Malindi counterpart Aisha Jumwa have said they will not appear before the ODM disciplinary committee on October 10.

They spoke on Saturday

during a funds drive for Shomani Girls high school which was also graced by Ruto at Kakuyuni, Malindi.

On Friday, the two dared party leader Raila Odinga to sack them and prepare for the worst in the Coast region which has for long been his key stronghold.

Reports indicate that over 30 elected coastal leaders have ganged up to support the ODM rebels.

Dori who also doubles up as ODM's Coast Parliamentary Group Chairman said they have shifted their support to the DP because ‘it is his time’.

He wondered why Raila is working with President Uhuru Kenyatta but he does not want his juniors to support the deputy president.

“Leave us to work at the low level with Ruto, there was a time you were fit. We left our families to fight for your victory, it’s not Dor or Jumwa who rejected Raila, now we want to help Ruto it’s his time,’’ he said.

Dor said they will go all over Coast region including Tana River, Kilifi, Kwale, Taita Taveta, Lamu and Mombasa to ensure Ruto gets support.

On her part Jumwa said she will go on holiday in Malindi if free on October 10 but will not to meet the disciplinary committee.

“There is no letter that I was given to appear in ODM disciplinary committee, on that day I will be having a lot of work in my constituency, but If I will have no job on October 10 I will go for holiday.

The ODM Parliamentary Service Commissioner said she will not be threatened or intimidated for supporting Ruto.

recalled how hard she worked for Raila which even led her to be arrested and wondered how this time their names are hitting headlines for allegedly betraying the party.

She dared the ODM party to remove her from the position of Commissioner over her stand.