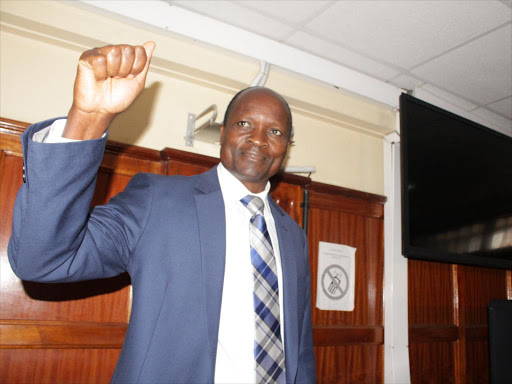 Migori Governor Okoth Obado with his lawyers at a Milimani court on Monday, September 24 where he was charged with the murder of Rongo University student Sharon Otieno, 26. /COLLINS KWEYU

Migori MCAs have kicked off moves towards impeaching embattled governor Okoth Obado, who was charged with Sharon’s murder in Nairobi on Monday.

By 6pm yesterday 23 of the 60 members of the county assembly had signed the petition to remove Obado on grounds of integrity.

They say he has disgraced himself and his position has become untenable.

But the assembly Majority leader defended the governor and told off those scheming to impeach him.

"We are aware of those plans but nothing has been presented to the assembly yet. When they do we will deal with it then," Lawrence Onyago told the Star yesterday.

Obado was arrested last Friday after recording statements in Kisumu and Nairobi. He has been accused of killing his pregnant girlfriend, Sharon Otieno, between September 3-4.

He denied the charged before High Court judge Jessie Lessit on Monday and was remanded at Industrial Area remand prison until the court rules on his bail application on Thursday.

Besides the murder accusations, Obado and his close allies are under investigation by the EACC for alleged money laundering in which millions of shillings from the Migori country have been paid out to a ring of connected companies in dubious contracts.

Some of the bank accounts of the suspect companies, including those held by his wife Helen, have been frozen after the EACC obtained court orders.

The anti- graft agency is tracing the trail of multi-million transactions that include overseas accounts.

Separately, a Nairobi-based NGO yesterday petitioned the Ethics and Anti-corruption Commission to initiate Obado’s removal from office for failing the integrity requirements in the Constitution.

said EACC should file a constitutional petition at the Supreme Court to seek Obado’s removal for breach of integrity if he does not resign.

In a letter copied to DPP, AG and IEBC yesterday,

Obado cannot discharge his duties in the manner contemplated by the Constitution and the principles of public service.

"Obado lacks in character and integrity demonstrated by various incidents which are matters of public knowledge," the petition reads.

"The conduct of state officers in private and public is very central in determining whether they have required integrity and suitability to hold public office," he said.

will address suitability of Obado to remain in office is the acid test and tipping point in executing its mandate."

Wainaina drew comparisons with the case of former Deputy Chief Justice Nancy Baraza who resigned in 2012 after a judicial tribunal was set up to determine her suitability for pinching a guard on the nose at Village Market.

The tribunal, he said, set a precedent in the application of Chapter Six by separating personal integrity from criminal liability of public office holders.

"The tribunal made a distinction between presumption of innocence as articulated in the administration of criminal justice and integrity standards expected of public/state officers.

"The tribunal clearly stated that unethical conduct or lack of integrity by state officers only required accurate proof and material facts," he said.

Obado will remain at Industrial Area prison until Thursday afternoon when the court will rule on his bail application.

His lawyer, Cliff Ombeta, argued that murder like all other offences is bailable under the law.

Obado is the first suspect to be charged in connection with Sharon’s murder. His personal assistants, Micheal Juma Oyamo and Caspal Obiero, are expected to be charged today.

On Monday, DPP Noordin Haji directed the DCI to pursue and arrest the hitmen who executed Sharon.

The DPP said investigations so far have revealed that the crime was executed by the governor's acquaintances to avoid a political backlash.

There is a likelihood that Obado may face a second count of murder for causing the death of the unborn child. The deceased Sharon Belyne Otieno was seven months pregnant with a male child when she was killed.

Senior Assistant Public Prosecutor Alexander Muteti told Justice Lessit that the life of a human being begins at conception. He cited Article 26 of the Constitution which provides for the right to life.

In an affidavit filed in court, the prosecution said the unborn child was killed by penetrating stab wounds from Sharon's back to the stomach.

The post mortem which was conducted at Rachuonyo Level 4 hospital also reveal that Sharon’s intestines were hanging after she was stabbed on the neck, back and abdomen.

"From the injuries occasioned to the deceased mother and unborn child there was deliberate malicious intention to cause the death of both mother and child," reads part of the affidavit.

Obado’s defence team that includes former judge Nicholas Ombija, Evans Ondieki, Cliff Ombeta and Rodgers Sagana yesterday argued that although the allegations are grave they cannot be used to deny him his fundamental rights and freedom.

"My client shall abide by all conditions that shall be set by the court as a prerequisite for being granted bail. He shall not interfere with witnesses in this matter or investigations should any be carried out," he said on behalf of Obado.

In a brief rejoinder, Deputy Director of Public Prosecution Jacob Ondari opposed Obado’s release saying the victim’s family is under threats and intimidation which are believed to be perpetrated by Obado through his accomplices.

"Release of the accused person on bail pending the hearing and determination of the trial is not absolute and is at the discretion of this court," he said.

Ondari said investigations are incomplete and they will be proceeding back to Migori to interrogate close family members and county employees.

"Obado has a lot of influence in Migori by virtue of the his position as governor and there is a likelihood of interfering with the ongoing investigations," said Ondari.

Initially, regarded as a person of interest Obado has since become the centre of the investigations.

The DPP has since established

According to the Sate, Sharon was lured to Migori area where she was abducted and driven to the scene of murder at Owande area in Karachuonyo South where her body was found in a thicket on September 4.

The vehicle was intercepted on 16 September within Migori town and the driver, Jackson Otieno Gombe, arrested.

Gombe has since recorded a confession which the prosecution said it intends to use in the trial. The defense has opposed it, claiming it has been doctored.

view of the intricate relationship between Obado and in view of the confessions recorded by same suspects to wit Jackson Gombe, it is extremely dangerous to release the accused person on bail for he remains a serious danger to society and the witnesses that may appear and testify in the case," said Ondari.

He told the court that the investigations are complex and involve multiple suspects covering a wide range of issues and suspects spread over a wide area.

"We have in our possession sufficient evidence which links the accused person and his accomplices to the commission of the heinous crime," said Ondari.