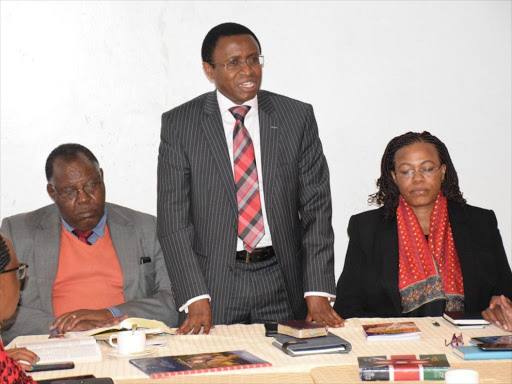 EACC deputy CEO Michael Mubea speaks during the launch of a Bible Study guide to help boost the war on corruption on Wednesday, September 26, 2018. /COURTESY

The EACC has embarked on the use of Bible study to boost the commission's fight against corruption.

The commission, chaired by retired Anglican Archbishop Eliud Wabukala, launched the Bible Study Guide together with the

'Integrity: A Weapon Against Corruption', will be put to use by groups and individuals dealing with corruption matters, the Ethics and Anti-Corruption Commission said on Twitter.

"The Bible Study Guide is intended to help Kenyans interact with the Bible and discover God's position on corruption and his direction on living a corruption-free life."

The commission said every member of the society has an opportunity to contribute to the success of the war against corruption.

"Regardless of your status in the society, you can make a difference. The Guide inspires us to act and to believe our country can be free from corruption," it added.

"The fight against corruption can be won but everyone must commit to live a life that enhances the virtues of integrity, justice, patriotism and love for one another," EACC said.

is losing a third of its State budget - the equivalent of about Sh608 billion, to corruption every year.

has a history of multi-million dollar scandals that have failed to result in high-profile convictions.

This has angered the public, who accuse top officials of acting with impunity and encouraging graft by those in lower posts.

Business leaders, on a number of occasions, have cited pervasive corruption as one of the biggest obstacles to investment.

In April, the commission said it will involve the Office of the Director of Public Prosecutions when probing graft to effectively gather evidence that can secure convictions.

Wabukala and DPP Noordin Haji then said detectives will work jointly with prosecutors to gather watertight evidence against corruption suspects.

The EACC boss said the commission will focus on graft prevention, as opposed to pursuing perpetrators after a crime has been committed.

The EACC and the ODPP have been blamed for rampant corruption with only a few convictions secured against architects of mega corruption deals.