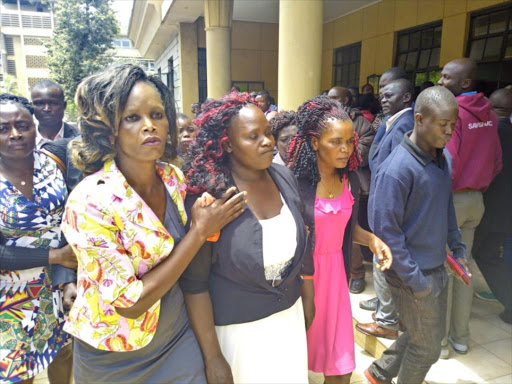 Sharon mother Melida Auma is helped on her feet as she arrives at the Milimani law court, Monday September 24, 2018. /SUSAN MUHINDI

Migori Governor Okoth Obado is set to spend another night in remand at the Industrial Area Prison pending the ruling of his bond application on Tuesday.

The charge is that together with others not before court, he murdered Sharon at Owado area in Rachuonyo sub-county, between September 3 to September 4.

The county chief also faces the charge of aiding, abetting, and financing the murder.

Obado filed an application to be released on bail but Justice Lessit directed that the matter be heard on Tuesday afternoon.

His lawyers also requested for an early hearing date arguing that the governor was arrested on Friday.

But the prosecution led by Jacob Ondari opposed the bail application and applied to have the governor remanded until Wednesday.

The embattled governor spent three 'humbling' nights at the Gigiri police cells following his arrest. There was no VIP treatment for him while in custody.

Sharon's mother was among dozens of people who attended the court to follow the proceedings as the trial began at Milimani law court, Nairobi.

She teared as the case went on and had to be assisted on her feet by two women who accompanied her to the court.