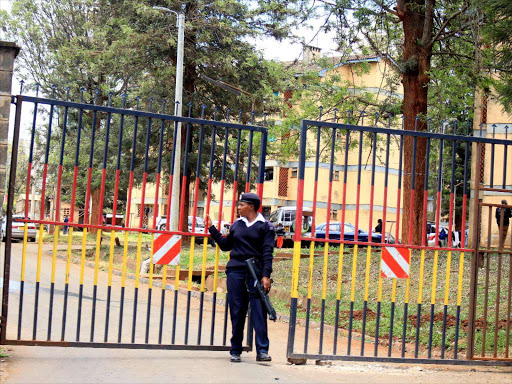 There was no VIP treatment for embattled Migori Governor Okoth Obado who has been in custody at the Gigiri police cells for the last three nights.

For a man used to the trappings of power, the finer things in life and the best of food, Obado’s three nights behind bars have been humbling.

He has been eating sukuma wiki and ugali since Friday evening when he was placed in a 20-man cell. He was joined on Saturday by 17 VIPs and two men arrested for being drunk and disorderly.

Obado will be charged in court this morning with aiding, abetting and financing the murder of 26-year old Rongo University student Sharon Otieno. She was tortured and mutilated; her seven-month-old baby was ripped from her womb on September 3.

Obado admitted he had an affair with Sharon and that the baby was his but denied anything to do with her killing.

When the Star visited the police station, incognito, yesterday, Obado was seated alone in an open corner of the compound warmed by the morning sun.

He looked distraught, deep thought, holding his head in his right hand.

Usually the Migori boss wears sharp suits with matching shirts and ties, and expensive watches. Yesterday, he wore grey pajamas trousers from his own closet, a grey T-shirt, a grey jacket with a hood and new green slippers. He was the only one visible wearing both shoes.

A source at the station described Obado as generally quiet, mostly keeping to himself.

Occasionally, he was seen mingling with other high-profile prisoners, who had been arrested on Saturday. They included top Kenya Revenue Authority and Kenya Bureau of Standards officials held in connection with the alleged import of substandard rice. His cellmates included Kebs managing director Charles Ongwae.

Others are Martin Nyakiamo, who is the Kebs Coast regional boss, and other top Kebs officials Erick Cheshire, Erick Onyango and Peter Ndungu.

Shortly after 12.30p when the Star visited, we were informed that Obado and the other men had just finished lunch and were enjoying the sun in the open area.

Yesterday, Obado stood out from the others. Probably after recognising him, his fellows allowed him to sit in the only available chair in the open area. The others sat on the floor.

In the past prisoners were fed on half-cooked ugali and half-cooked cabbages but the fare has improved with the new catering unit of the police canteen.

The sukuma wiki and ugali were well cooked but without the spices and probably some chicken or meat the governor would have liked.

There was no nice dinnerware common in the palatial homes and hotels frequented by politicians. Just plastic plates.

There was no cutlery. Obado ate using his fingers, like everyone else.

The diet had not changed since Friday, though there had been hope of variety, maybe some beans.

We were informed there were strict instructions from the station commanders that no food was to be brought from outside.

Obado’s wife, Hellen, children and sisters visited over the weekend. A group of Migori MCAs also visited yesterday. All underwent vigorous security checks and vetting when entering the police station.

The gates to the police station were locked and manned by armed police with orders to bar anyone not authorised by senior commanders.

No vehicles were allowed in the police compound. The governor’s wife and others had to park outside and walk to the gate.

Once inside the police station, visitors were further screened at the report office before being allowed to see their relatives.

With the 17 top managers of KRA and Kebs locked up along with Obado, that meant only two men were not VIPs. A source said the two were arrested for being drunk and disorderly in Mwimuto, Wangige, on Saturday night.

Others in custody elsewhere in the murder case include Obado’s personal assistant Michael Oyamo. He was the first to be arrested after Nation journalist Barack Oduor directly linked him to Sharon’s abduction and murder.

Oduor told police that it was Oyamo who lured him and Sharon to a hotel in Rongo, Migori county, before leading them into a Toyota Fielder, which was carrying the suspected killers.

Jack Gombe, a taxi driver, is also facing charges because he was driving the vehicle

Yesterday, Obado’s supporters in Migori county held street protests and demanded the release of their governor.

The protesters said the charges leveled against their Governor were politically motivated.

The protesters marched through the streets of Uriri trading centre on the Migori-Kisii highway, carrying placards urging the government to free Obado.

It was not clear who organised the protest.