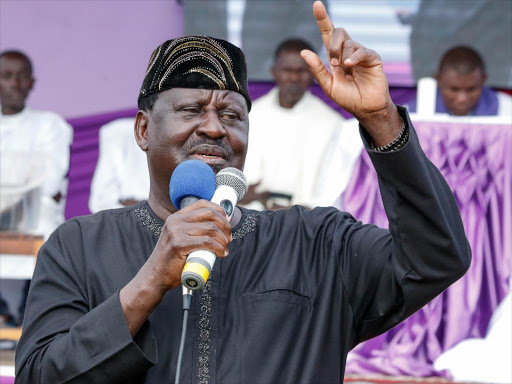 ODM leader Raila Odinga has given the government a year to redeem itself with the new tax measures, failure to which he will lead calls to scarp it.

The former Prime Minister said his party backed the new tax on condition that the State has to cut extravagant spending for the sake of development.

Raila said they will campaign for zero taxation on fuel reached during the NASA parliamentary group meeting.

President Uhuru Kenyatta assented to the Bill on Friday, hours for the 73rd Session of the UN General Assembly.

The eight per cent on fuel levy is not to make Kenyans suffer but to boost the country's economy to the intended standards," he said in Ukwala on Saturday.

"We have told the government to cut all unnecessary spending like using big cars, traveling in business class instead of economic class," Raila said.

He said all government officers should be compelled to use small cars like the Volkswagen Passat recommended by Uhuru when the latter was Finance minister.

Raila added that Members of Parliament too should not be allowed to hold their committee meetings in Mombasa but to conduct them in Nairobi.

"Nowadays MPs are prone to going to Mombasa for committee meetings. They travel in business class hence wasting public funds."

"We cannot allow the 8 percent VAT on fuel levy and entertain extravagant speeding by the Executive and Legislature," Raila, who on Saturday congratulated the legislators for approving the Bill, said.

"As someone who has been the prime minister of this country I know what the budget-making entails and how it should be balanced by expenditure."

Raila said if the country has a big budget gap, one cannot run the country's economy in the right direction unless the expenditure is reduced or taxes are increased.

"If we are to reduce the taxes, then the expenditure must be reduced and that will mean budget cuts for important sectors like health," Raila said.

Raila revealed that it's due to such balance that the President reduced taxes to 8 per cent for a balance of State expenditure and income.

The Nasa leader said the move requires sacrifice from Kenyans but assured that he will check on the government to avert incidents of wastage in the country.

"There is a lot of money going into individuals pockets with the runaway corruption in the country," Raila said.

The Nasa leader hailed the British and Switzerland governments for agreeing to work with Kenya in repatriating monies hidden in the respective countries.

"This money should be repatriated back to support the economy as quickly as possible," the former premier said.